They are the inhabitants of the Balkans who find themselves in difficulty when they have to give a precise meaning to the word sevdah and to the songs that represent them, the sevdalinke . Both terms refer to a musical reality typical of Bosnia, attributable to the folk universe, and therefore to a cultural and anthropological substratum that has his roots at the dawn of the Slavic-southern civilization. Amira Medunjanin grows up in a music-loving family, especially the mother, who usually indulges in traditional Bosnian singing. She is, in fact, who introduces her to the magical world, that today called the Balkan blues. The first real date arrives for her with the participation to a record of Mostar Sevdah Reunion , supergroup formed in Mostar in 1998. In 2005 finally released her first solo album, Rosa, produced by Dragi Sestic , already re- discovering great talents like Saban Bajramovic and Ljijana Buttler-Petrovic . From there his career continues,continuously, gathering support in his homeland, where she is a queen, and all over Europe, ranging from the audiences of folk to the most exclusive and refined jazz festivals. Ante Gelo, one of the most influential producers of the Croatian jazz scene, is an excellent guitarist and great live performer.
Training: Amira Medunjanin – voice; Ante Gelo – guitar. 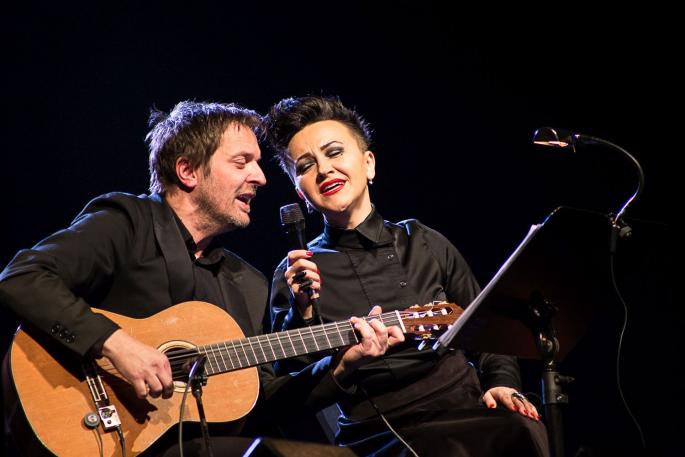