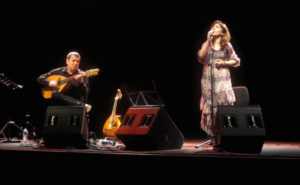 The musical life of Sardinia is characterized by the archaic features of instruments and vocal techniques whose memory is lost in time, but also by the rich vitality of the present.

For years Elena Ledda and Mauro Palmas have been experimenting, without ever losing their identity, new possibilities of matching traditional music and other sound expressions, foreshadowing a music embracing the influences of jazz, songwriting and Mediterranean music.

After classical studies Elena Ledda decides to continue her career in traditional music and its reworking; she is one of the most suggestive voices of the Mediterranean area and represents the female image of Sardinian music. Many are the recordings to her credit, among which Rosaresolza stands out, with Andrea Parodi, who receives the Targa Tenco and the Premio Città di Loano for 2007, and the more recent and splendid Lantias. She is artistic director of the Andrea Parodi Prize.

Composer, multi-instrumentalist and mandolist, Mauro Palmas began his career at a very young age as leader of the Nuova Generazione group, founding in 1977, with Elena Ledda, Suonofficina turning his attention to Sardinian and Mediterranean music in general.
In that period Palmas devised a performing technique that, starting from the rhythms of folk dances, allowed him to carry on the mandola the language of the ancient Sardinian Nodas, traditionally performed with launeddas. Composer of music for cinema and theatre, he has recently released the beautiful album Palma de sols.