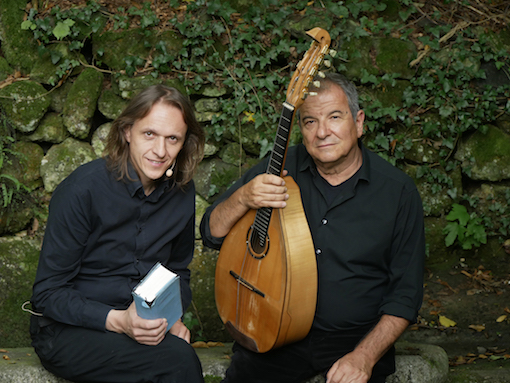 The Divine Comedy begins, ends and begins again immediately in the middle of the journey of our life. On the occasion of the seventh centenary of Dante Alighieri‘s death (1321 – 2021), Alessandro Anderloni and Mauro Palmas present a new theatre-music project and take the audience on a physical, poetic and musical journey through the three canticles of the poem, with the diction of three cantos accompanied by original music. From the bedlam of the fraudulent councillors where in the forked flame Ulysses’ voice narrates his last mad flight (Inferno XXVI), to the beach of Purgatory with Dante’s meeting with the musician and his friend Casella (Purgatory II), to the white rose, in the spreading light of the Empireo (Paradise XXX).
The show is developed in three stages and can be presented in itinerant form, in natural or artistic places, or on theatre stages, in auditoriums or concert halls. Alessandro Anderloni’s narration weaves together news and anecdotes about Dante Alighieri’s life, his fascination for his Comedy and the diction of the three cantos by heart, accompanied by Mauro Palmas’ musical interventions with music composed for the show. An experience in which words and music mark out a physical and spiritual journey and restore that shock of poetic intensity that Thomas Eliot describes when faced with the greatest poem ever written by a man.

Alessandro Anderloni
Author, director and actor, he began his career as a playwright in the mountains of Verona at a very young age, writing and staging more than fifty original texts from the 1990s to the present day. After graduating in Literature, he devoted himself to theatre didactics and specialised in choral conducting and music composition for the stage with Bepi De Marzi. He has dedicated himself to the Divine Comedy for more than twenty years, and has produced three theatrical re-elaborations for children, the prose shows Inferno and Comedìa, and the dance-theatre show La Divina Commedia with choreography by Silvia Bertoncelli and music by Zeno Baldi. Since 2018 she has been leading a theatre project dedicated to Dante with the company of inmates Teatro del Montorio in the Verona Prison. In 2016 she debuted as a performer of monologues dedicated to the Divine Comedy (of which she knows many cantos by heart) and of countless musical narration performances, also touring. From the long association with Mauro Palmas, Il divino cammino was born in 2019.

Mauro Palmas
Composer, instrumentalist, researcher, he began his career in Cagliari collaborating with groups of research and historical-critical recovery of popular music. In 1977 he founded the group Suonofficina, which opened up traditional Sardinian music to encounters and experimentation with musical traditions from all over the Mediterranean. Specialising in the study of dance rhythms, he created a technique that enabled him to apply the language of the ancient nodas of the launeddas to the mandola. In 1979 he met the singer Elena Ledda, with whom he shared choices and projects that led to an intense and fruitful concert and recording activity (Ammentos 1979, Sonos 1989, Incanti 1994, Maremannu 2000, Cantendi a Deus 2009, Làntias 2017). In the same years he produced numerous recordings under his own name (A volte ritornano 1999, Cainà 2000, Il colore del Maestrale 2011, Palma de sols, 2019). He meets on stages all over the world the great protagonists of international musical culture, also through a rich activity in the field of stage music and soundtrack composition. He is in charge of the artistic direction of the travelling music festival Mare e Miniere.