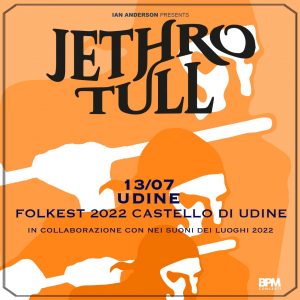 Back from a sold-out tour in Italian theaters and from the release of The Zealot Gene in January, Jethro Tull is ready and prepared for this summer’s tour. The Zealot Gene is their first studio album in eighteen years and it is among the top ten in the charts across the world, being welcomed by both audiences and critics. Jethro Tull appeared for the first time under this name in 1968, in the famous Marquee Club in London, where they immediately created a large following, playing across England. The real success unexpectedly came during the Sunbury Jazz and Blues Festival in the summer of 1968, when their debut album, This was, was released with the original members Anderson, Cornick, Bunker and Abrahams. After replacing Mick Abrahams with Martin Barre, about thirty musicians alternated working with Jethro Tull. One significant person who has stood amongst them all is, Ian Anderson. He typically performs with the band in about a hundred concerts all around the world every year.
The historic British prog band released The Zealot Gene on 28 January. The album, preceded by the single Shoshana Sleeping and by the track which gives the title to the entire collection, has been described by Ian Anderson as a mix of reflections on biblical themes and concepts. “While I have a spot of genuine fondness for the pomp and fairytale story-telling of the Holy Book, I still feel the need to question and draw sometimes unholy parallels from the text”.