Two albulms to the credit, winners in 2015 of the “Suonare @ Folkest” competition, are among the most vivid realities of the scene of the valleys of Occitan culture of Piedmont. Between 2016 and 2017 they dedicated themselves to the composition of new songs and to the realization of some videos for a new record project, “l ‘ÀRBOL”, which will be premiered at Folkest. In the same period, in collaboration with the actor Luca Occelli they prepared the theatrical show titled “Trees, Donkeys, Men and Women”.
Training: Remo Degiovanni – author, hurdy-gurdy, harmonica at the mouth and voice;Luca Pellegrino – voice, accordion, flutes and bagpipes; Manuel Ghibaudo – organ; Alessia Musso – Celtic harp; Giorgio Marchisio – double bass; Silvio Ceirano – percussion. 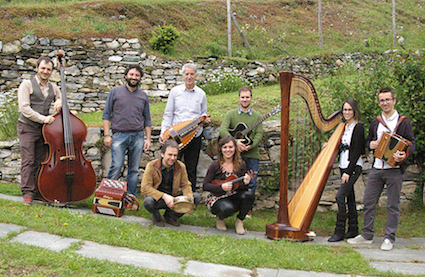