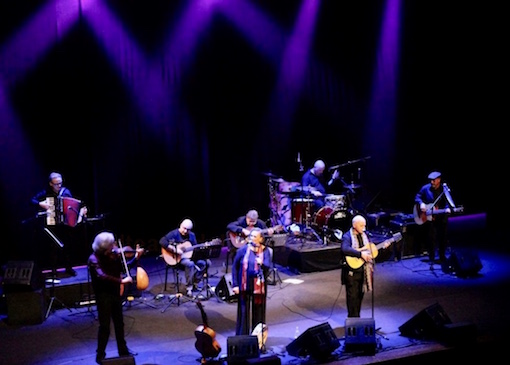 The Nuova Compagnia di Canto Popolare was born in 1970: the extraordinary success that the group obtained at the Spoleto Festival marked its international launch. Since then, the NCCP has repeatedly participated in all the most important festivals in Europe and overseas, alternating musical and theatrical activities, participating in numerous shows: La Cantata dei pastori, La canzone di Zeza, La Gatta Cenerentola, La Perla Reale, Sona sona. For this reason Eduardo de Filippo wanted them as guests in his theater, the San Ferdinando in Naples. In the nineties came out important records as Medina participated in the Sanremo festival, where they won the critics’ prize with the song Pe ‘dispietto.
Born in those years also collaborations with Angelo Branduardi and Zulù of 99 Posse. Still in 2001 the album La voce del grano (The voice of the grain) comes out, inserted in the first 20 in the World Music Charts Europe.
On the occasion of his fifty years of music NCCP has published a double CD 50 years in good company. The strong bond of friendship with Pino Daniele leads them to present at the event Pino is with a version of Donna Cuncetta. The year 2019 opens with the new tour Anime di Terra, before the publication, in 2020, of Napoli 1534 tra moresche e villanelle, an authentic masterpiece, directed and wanted by the late Corrado Sfogli, artistic director of the formation.