The Random Quartet was born in 2006 within the G. Verdi Conservatory of Turin; after the final exam, they continue together a musical discourse even outside the academic environment. Little by little, the idea of a string quartet detached from traditional canons takes shape, in which can coexist genres and tastes of music,that are very different from one anothert. Starting from these premises, develops a 360 degree musical experience, even if based on the solid foundations of the classical tradition. In 2007 the experiments began with arrangements of soundtracks, pop songs, and folk songs until the arrival to rock and metal music, to witness the great versatility of this training and YouTube.
Training: Giovanni Bertoglio – first violin and coordination; Lucia Pulzone – second violin; Tancredi Celeste- viola; Chiara Manueddu – violoncello. 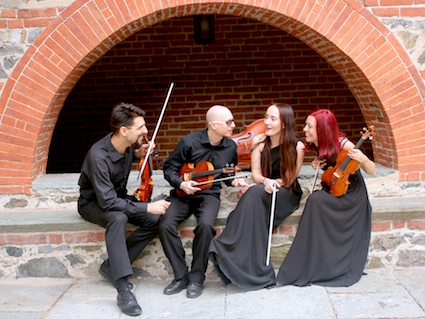