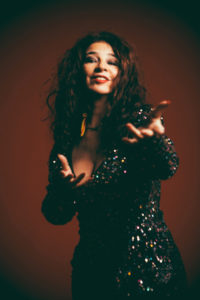 Teresa De Sio, born in Naples, is a free, independent, innovative and experimental artist. Her albums, (two and a half million copies sold), have always been decided by herself and self-produced. Since 2004 she has also published them through her own independent label, C.O.R.E., founded in the early 2000s together with Marialaura Giulietti.
She loves to present herself as an auteur folksinger: … folk music is the rock of the people. With folk music you learn to respect the men and women of our world, to recognize their past and thanks to that look to the future…

He began his career in the late seventies when he founded Musicanova with Eugenio Bennato; his experience culminated in 1978 with an LP with a strong folk atmosphere entitled Villanelle popolaresche del ‘500. In 1980 his first solo album Sulla terra sulla luna was released. In 1982 Teresa De Sio was released, which unexpectedly sold more than a million copies: songs like Voglia ‘e turnà, Aumm aumm and Pianoforte e voce became very popular.
The following year she released the album Tre, with another 800,000 copies sold, containing other classics such as E pazzielle, Terra ‘e nisciuno and Ario. In 1985 it is the turn of Africana, in which she is joined by Brian Eno, with a more rock sound. The following year she published Toledo e regina, an in-depth encounter with Neapolitan music of the late nineteenth and early twentieth century. Paul Buckmaster (already working alongside Elton Jhon, Rolling Stones, Miles Devis and others), who arranges the strings and conducts the orchestra for the accompaniment of refined masterpieces such as Passione, Catarì and Io te vurria vasà.

In 1988 it was the turn of Sindarella suite, the true story of Lupita Mendera, with Brian Eno and Michael Brook. In 1991 with Ombre rosse returns to the memory of the great-grandmother of Native American origin, which also contains Colomba e Bello mio. In this album Italian, Maghreb, Egyptian and Afro-American musicians play, including Omar Akim and Scott Hambusc. In La mappa del nuovo mondo of 1993, the commitment and the social theme become part of his poetic world in compositions like Teresa stanca di guerra and Io non mi pento.

In 1995 he recorded Un libero cercare at the Petrella theatre in Longiano. Fabrizio De André and Fiorella Mannoia also collaborated. In 1997 the live show Primo viene l’amore, with some extraordinary re-readings of his great successes together with three unpublished works including Rondine. La notte del Dio che balla, between tradition and technology, was born in the period of approach to Apulian folk music and the taranta, which led her to the CRAJ project, halfway between music and circus theatre with the presence of Matteo Salvatore, I Cantori di Carpino and Uccio Aloisi. With this show the collaboration with Giovanni Lindo Ferretti was born, which will lead them to participate in the 62nd edition of the Venice International Film Festival winning the Lino Miccichè Award, directed by Davide Marengo.
In A Sud! A Sud! of 2004 returns to celebrate Mediterranean musicality in an even more accomplished form, while Riddim a Sud brings it to the streets of Jamaica in 2008, a true project of creativity and interactive productivity, with Aprè la Classe, Roy Paci, Raiz, Ginevra di Marco, Ambrogio Sparagna.

At the end of 2009 Einaudi published his first novel Metti Il Diavolo A Ballare, a social-anthropological noir set in post-war Apulia that expertly narrates the life of a family in southern Italy amidst poverty, traditions and the magic of the Taranta.
In 2011 the album Tutto cambia was released, a new album of unreleased songs in which stand out the songs Non Dormo Mai Tutta La Notte, the version of the song by Mercedes Soza, Tutto Cambia, and Na Strada Miezzo ‘o Mare reworked in Neapolitan dialect by Fabrizio De André’s Creuza De Ma. At the end of the tour Teresa begins writing her second novel L’Attentissima which will see the light of day in 2015, again for Einaudi. Between Christmas 2013 and the first days of 2014, Teresa is invited by Pino Daniele to be part of Napule è tutta n’ata storia, during which they sing Voglia ‘e Turnà, Quanno Chiove and Napul’è. In January 2017 Teresa Canta Pino, a devotional work, was born.

In May 2019 Puro Desiderio, Teresa De Sio’s last record, is released, marking the passage into a new era of Teresa De Sio’s creativity.
… I opened a new, for me unprecedented, reflection on myself, on feelings, on depths in which until today I had not wanted to look…
A record about love… when desire moves everything. Pure Desire is a driving force of the soul, of love, and of all battles. Without the power of desire life stagnates…