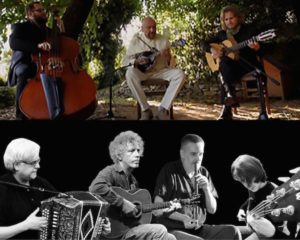 Giovanni Battista Marzuttini was a man of multifaceted and versatile genius, eccentric and nonconformist. After studying at the Academy of Fine Arts in Florence, he returned to Udine with the title of professor of drawing. In 1883 he undertook with passion his musical studies of harmony, counterpoint and fugue with Luigi Cuoghi and became master of music; in 1885 he was conductor of the band in Tarcento, where he married his teacher Maria Giovanna Troino in 1889, who gave him two sons, Arnaldo and Guido. The following year he wrote a collection of pieces for voice and piano, according to the taste of the time. In 1886 he founded the Udine Mandolinists and Guitarists Club in Udine, today Orchestra a Plettro named after him from 1926; from 1890 to 1897 he moved to Trieste where he privately taught mandolin, mandola, guitar and zither and founded a Mandolin Club. In those years he published waltzes and romances, but above all methods and anthologies at the publisher Carlo Schmidl. After various engineering works, he returned to Fauglis di Gonars after the First World War, where he was prefectural commissioner from 1919 and mayor from 1924 to 1930 and died there on 1 December 1943. The years he spent in Gonars were the most productive from an artistic point of view. Unfortunately, the oil, watercolour and pastel paintings were largely dispersed, especially the portraits, while traces of rural landscapes and sketches remained, with which some exhibitions were set up.

In 1927 Marzuttini formed a male choir of forty-five elements which he directed until 1942 and which today is called, in his honour, Tite Grison. The music collection donated by his son Arnaldo to the Iacopo Tomadini Conservatory of Music in Udine, on the other hand, is intact and contains more than two hundred works, transcripts-reductions from melodramas for different ensembles and original compositions anchored to late nineteenth-century writing. Operettas, fables and vaudevilles, almost always in Friulian, accompanied by sketches of scenes and costumes, are enriched by the ironic freshness typical of his temperament. His fame is mainly linked to the thirty or so villotte in Friulian for three voices on his own lyrics, by Pietro Zorutti, Bindo Chiurlo and others; he published them in the periodical Ce fastu?, in his own album in 1930 and in the collections of the Friulian philological society. He wrote dances, hymns, symphonic pieces and a lot of instrumental music, especially for picks but also for strings, for voice and piano, and sacred polyphonic music. He also developed photography; the town of Gonars, very careful to honour his memory, has collected about a thousand pieces among plates, stereoscopic plates and films from the end of the nineteenth century to 1940. Only recently has his photographic collection been reassembled and enhanced with an exhibition and catalogue edited by Roberto Toffoletti.

From his compositions in Friulian we started out to imagine this work dedicated to him, a project on several years, to document in a modern and scientific way, but at the same time usable, a part of his enormous production. On the one hand, his most popular moments will be explored in depth, thanks to the work of Lino Straulino and La Sedon Salvadie (with Gianfranco Lugano on electric mandolin and flutes, Andrea Del Favero on diatonic button accordion and Luca Boschetti on bass), who have been able to create over the years a real school in the reinterpretation of the popular Friulian tradition, on the other hand, three musicians of the highest technical level, such as Massimo Gatti on mandolin, Michele Pucci on guitar and Alessandro Turchet on double bass, reunited under the name of Kujacustic, will take from them the instrumental pieces chosen from the vast repertoire for stringed instruments of Marzuttini’s production.