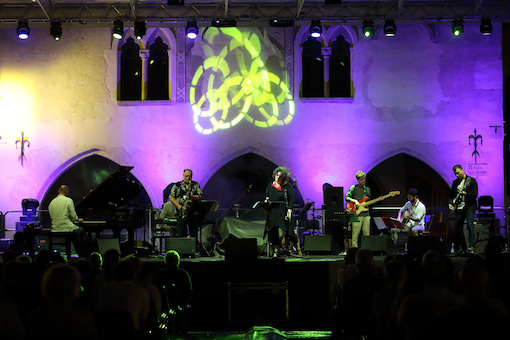 Saturday Night with Elton is a musical project by Davide De Lucia, Flavio Paludetti, Andrea Del Favero and Cristian Cecchetto, born as a tribute to the figure of the English singer and musician Sir Elton John. This project is being proposed while Farewell Yellow Brick Road is taking place, the last major world tour of Elton John (from 2018 to 2021 with over 300 concerts) and a couple of months after the release of the movie Rocketman dedicated to him.

This work, after those dedicated to Sting and Carole King, sees the collaboration between Folkest and the Musical Association Tomat of Spilimbergo continuing over the years and will be previewed in Piazza Duomo in Spilimbergo on July 6, 2019, during the closing nights of Folkest. The artist needs no introduction, with his talent and extraordinary temperament he was one of the greatest performers in the history of pop and rock: a musical and fashion icon that influenced a generation of artists.

The proposed work has as goal the re-reading of a part of the many passages written by Elton John in the perhaps most important period of his musical career, namely in the seventies and early eighties, and intends to highlight the extraordinary melodic capacity of the English artist. So you can listen to masterpieces like Your Song, Candle in the Wind, Don’t Let the Sun Go Down on Me and many others revisited by the Tomat Band in an extremely respectful rereading of the originals.

The formation offered by this project, the Tomat Band, already fresh from the success of the concerts held at Folkest 2017 and Folkest 2018, in which it presented the remake of the Tapestry album by Carole King and the Twenty for twenty project dedicated to Sting, is formed by professional musicians with many years of live and studio experience: the Venetian jazz musician and singer Francesca Viaro at vocals, the bluesman Flavio Paludetti at the electric guitar, the Friulian jazz player Nevio Zaninotto at the soprano saxophone, Cristian Cecchetto at the drums and Davide De Lucia at the piano and keyboards. They are joined by two talented young musicians such as Eugenio Dreas at the electric bass and Jacopo Russo at the acoustic guitar.

The songs were chosen from the most important and famous of the seventies and eighties and from the albums: Elton John, Madman Across the Water, Honky Château, Don’t Shoot Me I’m Only the Piano Player, Goodbye Yellow Brick Road, Caribou, Captain Fantastic and the Brown Dirt Cowboy Blue Moves, Too Low for Zero trying to represent each of them in the most meaningful and coherent way.