A multi-ethnic region, rich in art and nature.
For centuries, Friuli has been a multi-ethnic region par excellence, where Friulian populations and Resians, Ladins and Slovenians from the Torre and Natisone valleys, high-German populations and Venetians, Giulians and Slovenians from Karst lived and live together. And, it is precisely in a region so rich in different cultural stimuli that Folkest is born, a festival that, over 38 years, has offered music without borders or definitions: the Irish group The Chieftains and Miriam Makeba, Donovan and Fabrizio De André, Joan Baez and an Indian dancer, a Resian player and Van Morrison, the rhythms and colours of Oceania and of East Africa, the most remarkable music and the most mysterious one.

The synergy between regional territory and Folkest has develop in such a functional manner and so rich in values not only due to this cultural substrate. Over the years, villas, castles, ancient squares, centuries-old parks have been perfect scenarios for spectacular concerts or more intimate events, moments of study and research, seminars and exhibitions; all this has created a virtuous automatism that has brought hundreds of thousands of Italian and European tourists (Austria, Czech Republic, Slovakia, Slovenia, Croatia, Swiss, but also France, Luxembourg, Spain, Germany, Poland and even Finland and Denmark) in Friuli Venezia Giulia, but has also – and perhaps especially – strongly characterized domestic tourism, calling on residents in the region to learn more about their land of origin or residence. 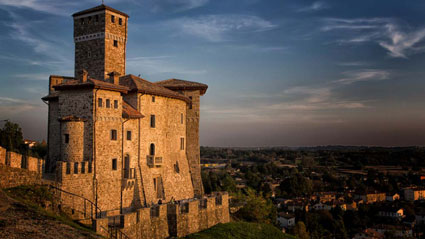 Some passages of this thesis are enlightening: “Folkest plays a fairly important role in the tourist offer of Friuli Venezia Giulia, as it goes beyond the simple, but essential music aspect. In fact, as the festival is itinerant, it allows to discover some forgotten corners of the region, it promotes, discovers and enhances its treasures, thus becoming a major subject of culture and tourism promotion.

Every year, the concert schedule is almost a sort of tourist itinerary around the most beautiful places in the Friuli Venezia Giulia, which are usually left out of concerts and even tourism. Thousands of tourists attend Folkest. This is an assessment of tourism expansion, creamed off substitution processes that occurred within the region due to the festival. A number of tourists attending Folkest has, in fact, taken the place of those who would have spent a holiday in the region.

This substitution is more significant as much as the facilities have high occupancy rates. The number of tourists attending Folkest has been estimated through an analysis allowing to calculate spectators from Friuli and those coming from outside the region or abroad. Folkest, in fact, is a strong call to a land that offers so many other beauties. It has been observed that usually tourists choose to have a short stay in the festival area: 15% (about four thousand people) of the 40% of Italians coming from outside the region, stays at least one day in Friuli; a third of the foreigners (approximately three thousand people) stays in the region overnight and another third remains at least two days, mainly in three- or four-star hotels”.

And: “The economic effects of Folkest are of two different types, specific ones (directly related to the nature and objectives of the event) and general ones. To the first category belong effects such as local employment, i.e. people making it possible to create the events. In fact, there are human and economic resources used with a tourism function. And, we shall also consider the support provided by the festival to cultural production and supply. Additional economic effects are created on tourist activities and sectors related. These are “non-specific” effects, that shall, however, be considered.

There is a double effect on regional economy:
1. higher occupancy rates in hotels, higher income and higher employment rate during the festival, therefore in a limited period of time;
2. promotion of the regional image in Italy and abroad, with a permanent effect.

This also involves a saving of economic resources for tourism promotion, which can be calculated through the opportunity cost method, i.e. the resources that would be needed to achieve an equivalent promotion action.

A minimum part of these economic flows remains to the organization (ticket and gadgets), while the most of them feed satellite activities related to tourism. The two sectors that benefit most from the presence of spectators remaining in the territory are of course the hotel industry, the catering industry and, to a lesser extent, the trade of souvenirs or local products.

In any case, each value category agrees that in the period of the festival, namely in July, the turnover increases. This turnover, which is however difficult to calculate due to the intrinsic complexity to estimate all the economic activities directly and indirectly involved, according to appraisals, amounts about three million. A very valuable result given the current size of the event and its possibilities for future growth, with an increasingly considerable economic-tourist repercussion on the whole region”. (Ibid.)

Above all, Folkest is a great organizational machine that moves a large number of people and things, animating different economic sectors with great impact on the activities of the area and more.

The large numbers of Folkest

Since 1996, the full computerization of Folkest’s administrative services made it possible to store a set of data that constitute the operating assets of the festival (for the years prior to 1996, we rely on the historical memory of our employees).