Spilimbergo, city of the mosaic

The history of Spilimbergo 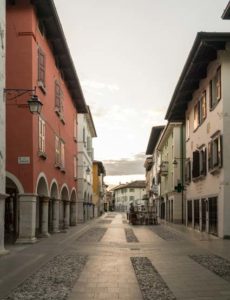 The history of Spilimbergo begins around the 11th century, when the Spengenberg counts, originating in Carinthia, were transplanted there as vassals of the patriarch of Aquileia. From the “castrum de Spengenberg”, as their castle was called, derived the name of the village.

In truth, the human presence has much older origins. In the Gradisca hamlet, in fact, the remains of a castelliere (a small fortified protohistoric village), have been identified, while the castrum itself could date back to the Roman era: a road passed through here that, coming from Sacile, crossed the Tagliamento river in order to then head towards Germany.

In the centuries following the settlement of the Spengenbergs, Spilimbergo developed both as a military stronghold and as a commercial transit center. There was a considerable demographic and urban growth, thanks also to the arrival of “foreigners”, such as Lombards, Tuscan and Jewish. In 1284, by Count Walterpertoldo II, the Duomo construction began, that is one of the most valuable Romanesque-Gothic monuments in Friuli; coeval of the Duomo are the Palazzo del Daziario, the Captain’s House and the Loggia (current town hall).

In 1326, on the initiative of the Bregonia and Bartolomeo counts, the jurisdiction of Spilimbergo endowed itself with its own legislative corpus, the “Statute of the Land of Spilimbergo”. In 1420 the town followed the destiny of the “Patria del Friuli” and passed to the Republic of Venice.

The War of the League of Cambrai particularly struck the region that was the scene of the conflict between the pro-imperial factions (Strumieri) and the pro-venetian factions (Zamberlani). In 1511 the castle was attacked and burned.

Nevertheless, in the following years Spilimbergo continued its period of economic prosperity which was also reflected at the cultural level. Dating back from this period are the reconstruction of the castle in Renaissance style and the works left by famous artists such as: Giovanni Antonio Pilacorte, the Pordenone, Pomponio Amalteo, Gasparo Narvesa and Irene di Spilimbergo. In the literary field, Gian Domenico Cancianini, Eusebio Stella and Bernadino Partenio distinguished themselves among the others, the latter was the founder of an academy for the study of Latin, Greek and Hebrew. Important is the contribution transmitted by some families of bourgeois extraction such as the Balzaro, the Monaco, the Stella, the Cisternini, the Fannio and the Santorini.

After the fall of the Republic of Venice (1797), Spilimbergo passed through the convulsive events of the Napoleonic era, arriving later in the Austrian Empire starting from 1814. Some of its citizens distinguished themselves in the 1848 uprisings, particularly Giovanni Battista Cavedalis and Leonardo Andervolti, but only after the Third Italian War of Independence (1866) did Friuli become part of the Kingdom of Italy.

Spilimbergo was among the municipalities most affected by the 1976 Friuli earthquake: the town mourned a victim and saw the devastation of its historical and artistic heritage. The reconstruction during the following years led to the rebirth of the city. 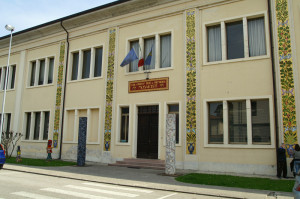 During the recent years, the artistic tradition of the city has not disappeared with the foundation in 1922 of the Mosaic School of Friuli, named after Irene di Spilmbergo and now known internationally.

The School collects the tradition of mosaicists and terrace makers of the Friulian foothills that from the 16th century onwards have traced the paths of mosaic in the world with their significant mosaic achievements: from the Library of Congress in Washington to the mosaic works of the War Memorial in Canberra, to the interventions at the Paris Opera, made – the latter – by Gian Domenico Facchina, mosaicist and entrepreneur of Sequals (Pordenone), who developed the reverse mosaic technique on paper.

Today the Mosaicist School is – as in its origins – a professional school where the Roman, Byzantine and Modern mosaic techniques are taught, but it also experiments aesthetic and functional solutions applied to the contemporary, by stimulating research, creativity and personal participation.