Formed in 2015 between Udine and “Carnia” the group trained by Noela Ontani (flute), Andrea Zampieri (clarinet), Federico Pace (percussions) e Giovanni Grisan (guitar) has made the eclectic his trademark, with genres ranging from pop to rock, from baroque to traditional music.

To enhance the evening the wonderful vocal harmonies of the singer-songwriter and folk guitarist of North East England Russell Joslin, who grew up in Wiltshire but soon moved to London, and the Australian singer Sarah McCaig: the duo is considered one of the most interesting groups in London area. 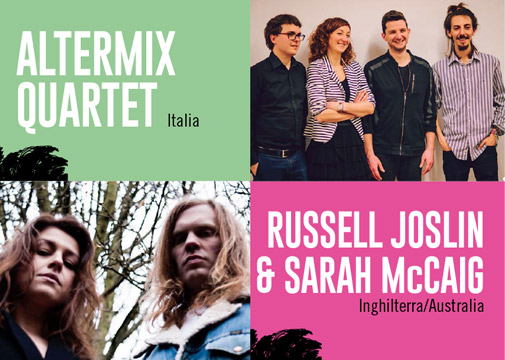 Center of the southern lowland of the province, probable medieval origin, alongside the traditional agricultural activities developed the industrial fabric. Once divided into two parts, of which the northern one ruled by Austria through the capitaneo of Pordenone and the remaining belonging to the Benedictine Abbey of Santa Maria in Sylvis of Sesto al Reghena, derives the toponym, documented from the twelfth century, by the fact of be crossed by the stream called Fiume. It is quite busy for work, thanks to his production activities and especially to the industries, which allow a good absorption of manpower.