Wednesday, July 4th, starting at 9.15pm the beautiful voice of Bosnian singer Amira Medunjanin, Billie Holiday from Bosnia, awaits at the Municipal Palace Park in Gorizia. Born in Sarajevo in the seventies, today she is the only interpreter of Slavic language capable of exporting her country’s traditional music outside its borders. Amira is the largest exponent of sevdah, the folk music of Bosnia and Herzegovina, a genre closely linked to its culture, in the same way as the fado in Portugal or the morna in Cape Verde. “The sevdah is difficult to define,” explains Amira. “It’s not just musical tradition, but a lifestyle, the reflection of memory, and sevdah’s songs, tell the beauty of life, desire, but also sadness, melancholy, the abyss of despair“. It will be accompanied by the guitar of Ante Gelo, one of the most influential producers of the Croatian jazz scene, as well as an excellent guitarist and performer. 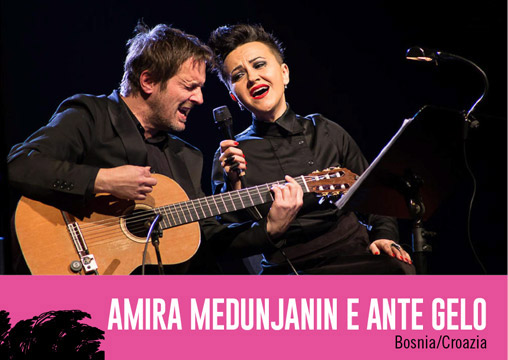 Place: Gorizia, Parco del Palazzo Municipale [How to get there]

Gorizia lies in the point where two important ways of communication that bind the Orient and the Western parts of the world meet. These two ways are called Isonzo Valley and Vipacco Valley. The Isonzo River flows near the city of Gorizia. Gorizia faces on the isontina plain, surrounded by the Collio’s hills. These hills are famous beause of the fine wine production. The famous painter Max Klinger described Gorizia as a marvellous gateway to Italy. While walking through the town, tourists can breathe a unique atmosphere due to the peculiar meeting of several traditions.
Gorizia is the center of the most important european cultures: Latin, Slavic and Germanic that contribute to enrich the aspects of the local traditions.