Folkstone are born in late 2004, and have ever since been pairing hard rock with traditionally acoustic instruments. Breaking through every chart for this very reason, bagpipes, bombards, harp, cittern, bozouki, hurdy-gurdy and flutes have a major role in their sound and in the creation of the evocative atmosphere that makes them so recognizable to audiences. During their energetic sets, in festivals both in Italy and abroad, they offer a wide variety of works from all their major releases. The first two, Folkstone and Dannati ad Metalla, were produced by Fuel Records/Self. They then followed them up with the acoustic Sgangogatt and their fourth record Il Confine. They then founded the independent label Folkstone Records to record Restano i Frammenti, their first live DVD release. Their next album Oltre…L’Abisso featured performances from Chris Dennis (former Modena City Ramblers and Nomadi) playing the violin and Fidel Forgaroli (former Verdena) playing the piano. Energetic rock is complemented by introspective and autobiographical lyrics that give a critical outlook on modern society through stories told by inusual characters that left their mark on history. 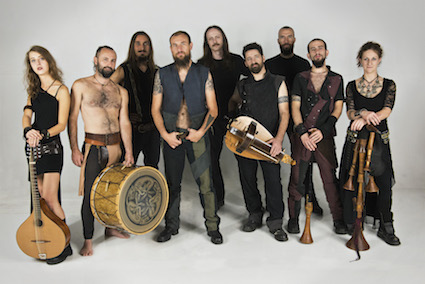