Musician from Calabria, our storyteller  prefers to accompan his “cunti” (tales) with a drum rather than with a guitar. These stories that populate his shows are less and less relegated to his homeland, and for the first time ended in a record called “Tamburo è voce- Battiti di un cantastorie”, the same name he gave to his previous  and seemingly eternal tour:”L’amuri di Clabria (the love of calabria) isn’t just a storiteller’s show, but the result of a artistic and existetial research. Since I my bond to this land is so profound, I decided to take this journey  in its stories, its “cunti”… To tell tales full of irony and drama that belong to Calabria”. 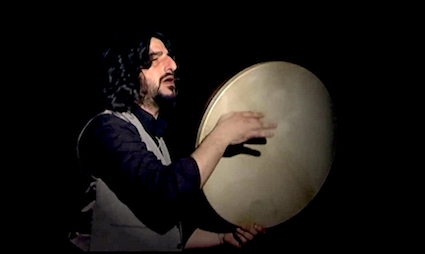