THAT DOG WAS A BAND NOW

THAT DOG WAS A BAND NOW – Usa/Can/Sve

That Dog Was A Band Now is a group consisting of elements from Canada, the United States, and Sweden. Formed in Califrnia in 2013, they traveled the United States far and wide, arriving in Canada with their energy-filled shows, before heading off to conquer Europe.
After a first self-produced album in 2015, they recorded a new album in Denmark in 2017, which will be released in May 2018.
Excellent reviews obtained in 2017 at the prestigious Bråvalla festivals in Sweden and at Svendborg Sound in Denmark.
Training: Dustin Allen – guitar, voice; Linus Wiberg – banjo, voice; Jared Mongeau – accordion, choirs;Leo Matthis-Dickson – drums, voice. 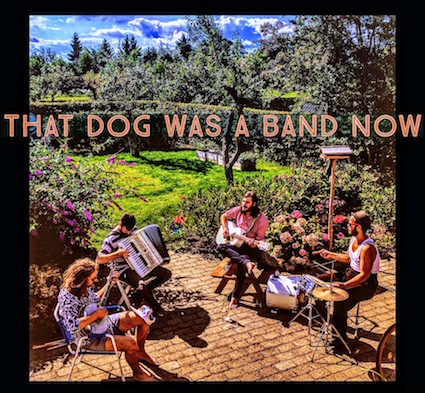