Like every year, the long caravan of the Folkest Award-Alberto Cesa, the competition in search of new talents that will perform at the next edition of Folkest, started in Arezzo. It is also possible to get an award of fifteen thousand euros from the Nuovo Imaie for the realization of a tour. In 2004, the Circolo Aurora in Piazza Sant’Agostino in Arezzo, a well-deserving association of people who are respectable and dedicated to culture and social issues, hosted the very first evening of what in its first editions was called Suonare@Folkest and now Folkest Award-Alberto Cesa. A lucky start, which was followed by many editions, all characterized by high musical quality.  On December 6th, during a live concert within the Festival Pifferi, Muse e Zampogne, directed as every year with great competence by Silvio Trotta, three groups challenged each other with notes: in the order Archive Valley, Sambene and Calimani.

Archive Valley is a Roman trio formed in 2017 that draws inspiration from Old-Time Music, an original expression of the Appalachian Mountains, from which they range, however, giving rise to incursions into various different areas, in an experimental folk blend of great intensity. Edoardo Petretti, Matan Rochlitz and Marco Zenini alternate with banjo, mandolin, double bass, piano and accordion and prove to be very talented musicians, impressing the jury also for the beautiful stage presence.  And then it was the turn of the Sambene, who came back from the publication of the beautiful album produced by Michele Gazich, which was also reviewed here on Folk Bulletin. Born within the Accademia dei Cantautori in Recanati (Mc), directed by Lucia Brandoni, Sambene borrow their name from the Sardinian word meaning blood, as passion and energy, and are a group with a strong connotation singer-songwriter on good folk roots, in which have a significant emphasis on the three voices present: the male one of Marco Sonaglia, guitarist and author of many lyrics and music, and the female ones of Roberta Sforza and Veronica Vivani.

They like their songs of struggle, the memories of partisan life in the territory of Marche, even if the theme in the long run can be a bit monochord. Great passion and good general organization of the group.  The Calimani, a home group, were born at the end of 2016 from the Tuscan duo Mattia Tartaglia and Francesco Checcacci, with an essential project, extended to a group: ukulele, drums and voices, with the basic idea of spraying the folk pop: with an enchanted, ironic, self-ironic and above all, openly simple look. They have a nice scenic presence, even if they recognize certain naivety to purge along the road. You can see a lot of passion, much better in the future.

It’s worth remembering that the goal of the Folkest Award- Alberto Cesa is not the simple competition between artists but rather to be able to evaluate at best, in a live context, the best proposals in the folk, world and singer-songwriter scene. With the added value, as already mentioned, for the overall winner, of the final prize awarded by the New Imaie for the realization of a tour. The work of the jury was a bit difficult, due to the strong differences between the proposals in the competition. In the end, the Roman Archive Valleys were rightly proclaimed the winners. 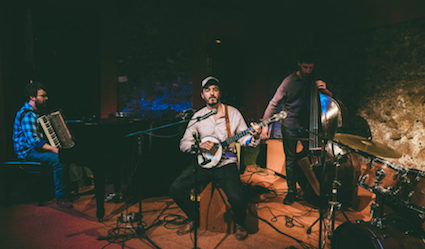