Friday 21 June the International Folk Festival will stop San Giovanni d’Antro (Pulfero) at the Grotta d’Antro with the Scottish group Baile (8.30 pm) and at the United World College of the Adriatic in Duino with the Ajde Zora (9.15 pm). 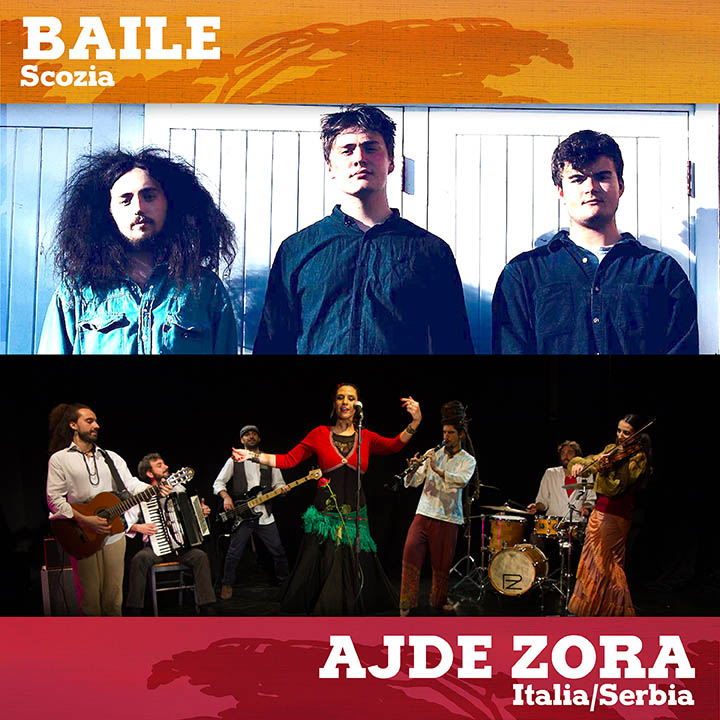 Baile is a young Scottish band from the Glasgow area that has focused its musical project on the sound of Scottish border pipes and flutes in a continuous dialogue with the rhythm section represented by guitar and bodhran, which move in a very free and modern way .

Venue: San Giovanni d’Antro, Grotta d’Antro [how to get there]

In case of bad weather the concert will take place in the Grotta d’Antro.

By the name of San Giovanni d’Antro, a church and a cave can be identified. The church was built inside the cave and both the attractions are located in Pulfero, in the province of Udine. The cave opens into the Mladesiena mountain’s face. While entering the cave, two porches can be identifiend: one is bound to drain the water coming from the inner part of the cave, while the second one was built to facilitate the construction of a gallery that leads to the worship area, located in the upper part of the vaults. Remains of jupper jaws, tooth, vertebrae, pieces of pottery belonging to the pre-romanic and romanic ages and mettallic pieces belonging to the Medieval Age were found inside the cave. The place of worship is composed by a church, a chapel, a presbytery, a sacristy and a loggia.

They are a musical caravan to explore the Balkans, through frantic dances and poignant ballads of the gypsy populations who have lived there for centuries; they are six musicians with the Serbian singer Milica Polignano.

With her comes the idea of ​​extending the traditional Balkan repertoire alongside fluctuating and melancholy pieces of Eastern European Romany tradition and rearranging traditional music in which the energy and passion of popular music is released between frantic dances and poignant balladsof people from troubled past.

They had the pleasure of collaborating with Erhan Veliov, trumpeter of the legendary Original Kocani Orkestar by Naat Veliov.

In case of bad weather the concert will take place at the Auditorium.

Duino is a place that is part of the municipality of Duino-Aurisina; it is located on the road that links Trieste to Monfalcone, on the edge of a panoramic riviera, it boasts the presence of two castles and vestiges of settlements as early as the late Copper Age, an age from which the area results always inhabited. It is the northernmost town on the Mediterranean coast. The small historical center around the castle and point of arrival of the Rilke path, has a semicircular structure, crossed by alleys and by a main street called “ulca” (which stands for “via” in Slovenian). In ancient times, the center was protected by walls that are still partly visible; here we can find the Church of the Holy Spirit of 1591, located near the walls of the castle which was once part of the monastery of the Servites. In Duino there is theUnited World College of the Adriatic, one of the United World Colleges, founded in 1982, which hosts students from all over the world.