Saturday 22 June, a double date with two bands, one from Scotland and one from the neighboring Slovenia. 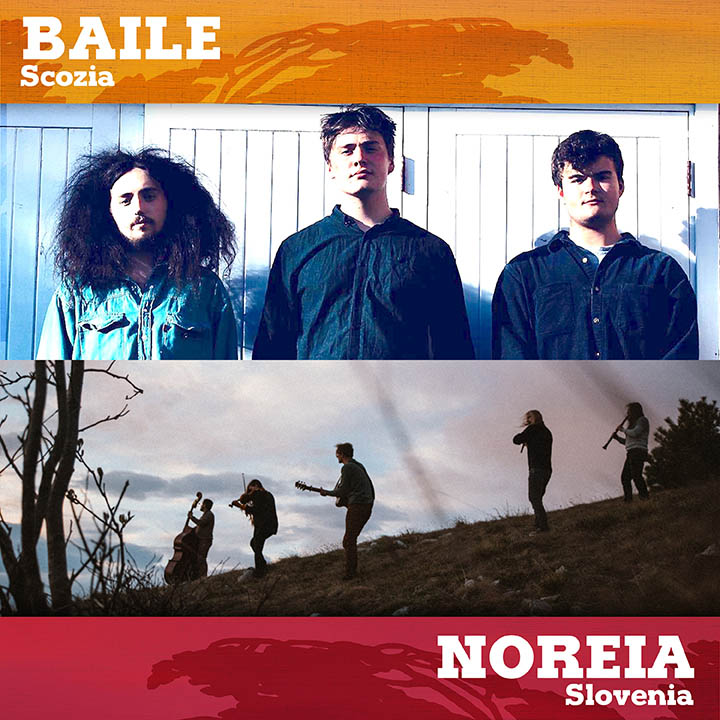 It starts with Baile on the Lungolago in Redona (9.15 pm), a young Scottish band from the Glasgow area that has focused its musical project on the sound of Scottish border pipes and flutes in a continuous dialogue with the rhythm section represented by guitar and bodhran, which move in a very free and modern way .

In case of bad weather the concert will take place at the Locanda al Lago.

Redona is part of the Tramonti di Sopra commune, in the Pordenone province. The place is famous because of its position, near the Tramonti Lake, also known as the Redona lake, an artificial lake in Val Tramontina. During times of drought, the ruins of the old village of Movada emerge. An incredible sight that one can behold only during the most dry and hot summers. The stone houses were floded by the Meduna stream after the completion of a dam near Ponte Racli in the early ’50s . The water completely submerged three local communities: Movada, Flour and the old town of Redona.

Meanwhile, in Toppo (Travesio), at the Villa Toppo-Wassermann always at 9.15 pm, the Noreia will perform. After a period dedicated to Irish and Breton music, Noreia began to create a unique mix between Celtic music and the traditions of their homeland.

Venue: Toppo, Villa Toppo-Wassermann [how to get there]

In case of bad weather the concert will take place at the Auditorium Comunale of Travesio.

The current Municipality of Travesio consists of two entities once separated from each other and with different stories: Travesio and Toppo. The area of ​​Travesio is famous for the production of Montasio cheese, of excellent quality. On the industrial side, the textile sector is very important. The antiquity of Travesio is evidenced by the presence of the church of San Peter, one of the biggest ones in the entire diocese of Concordia: originally it extended its spiritual jurisdiction from the Tagliamento to the Meduna territories, from the mountains to the parish of San Giorgio della Richinvelda. It was the matrix of all the churches in the area, including the one of Spilimbergo, which only after many centuries would have collected its spiritual heritage. Toppo preserves the remains of a medieval castle, a beautiful example of fortified architecture of Friuli. In 1220 eight farms, family-run rural houses, constituted the village of Toppo, while in the 16th century there were twenty-five documented farms. Starting from one of these farms it was developed the elegant villa Toppo Wasserman in the 16th century. In the square in front of the villa there is a 17th century palace with an entrance arch, and it was the summer residence of the counts of Spilimbergo.