Thursday 27 June the International Folk Festival will stop in Cassacco and Papariano (Fiumicello Villa Vicentina), for three events: the Two Time Polka sextet in Cassacco at the Parco d’Europa at 9.15 pm, the project Capitano tutte a noi and the Drakula Twins duo at 9.15 pm, both at the school garden in Via Nazionale in Papariano. 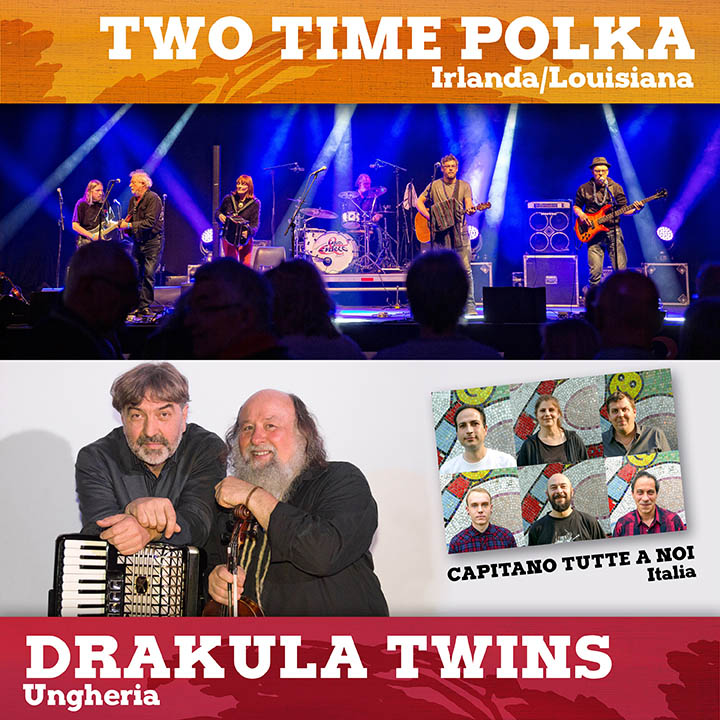 The Two Time Polka after Cassacco, will perform for Folkest 2019 also in Flaibano at the Piazza Monumento, on Saturday 29 June at 9.15 pm, and in Aquileia at the Piazza Capitolo, on Sunday 30 June again at 9.15 pm.

Venue: Cassacco, Parco d’Europa [how to get there]

In case of bad weather the concert will take place at the Palestra comunale of Cassacco.

Both the geografic and orografic placement of Cassacco were decisive factors in the settling of ancient inhabitants. The roman Via Julia one of the most important liesons between the Adriatic and the central Danube area, was fairly close. The Cassacco Castel was was a fort, a key piece of the defensive system of the vale that was never besieged nor destroyed thoughout its history. Some of its main features are the two mighty towers connected by a lower building; the place is reached via a evocative hillside path that ends near the Chiesa dell’Assunta, outside of the castle walls. Villa Gallici Deciani is also worth mentioning, built inbetween the XVII and the XVIII century. It is a manor house, with a great staircase and balaustrade, guestrooms, a small tower and a chapel, a small colannade and some labourer’s cottages. After the 1976 earthquake productive and commercial enterprises were etablished, also through the re-purposing of industrial structures.

In the seventies, the Drakula Twins group, coming from Budapest, literally revolutionized the way of understanding traditional Hungarian music, mixing elements of tradition with very modern cues, while continuing to use only acoustic instruments.

While the group’s life continued, the various members had various other experiences: János Hasur, eclectic violinist, was for years in Moni Ovadia’s Teather Orchestar, while Mihály Huszár ended up playing bass and double bass and touring Europe with Angelo Branduardi.

Now, with the intention of telling us about it and letting us hear all sorts of things, these two old cronies have got together for a duet with an infinite class and a stellar technical rate.

In addition to Papariano, the group will also perform at Spilimbergo in Piazza Duomo on Sunday 7 July at 9.15 pm.

Venue: Papariano, Giardino delle Scuole, via Nazionale [how to get there]

In case of bad weather the concert will take place at the Sala Bison a Fiumicello.

A characteristic of the Capitano tutte a noi is to be a project that is constantly open to other members, even if only to share a musical experience of listening to each other, in which the group, as well as music, becomes a family. The aim of the project “is to overcome the taboos – the musicians explain – to integrate into the group people without prejudice and open to confrontation, with different stories and approaches to music in order to enrich the sound and life of the band itself”. Music is a possibility of redemption aimed at a viable future: there are those who would like to make music their work and, if all happen to us, it could happen.

“We also like to deal with the revaluation of songs, performers or bands that are not very well known by today’s young people, and that instead left an imprint on the history of music”. But the Capitano tutte a noi also sign their own pieces, in which they give voice to the joys, fears and feelings of every day. “The songs we are writing will be a sort of biography that will tell people about us and will make us feel, after all music is a common good of all and has no prejudice against anyone”.

Another appointment with the Capitano tutte a noi for Folkest 2019 will be in Madrisio (Fagagna) at the Multipurpose Room “Sot dal morar”, on Tuesday 2 July at 9.15 pm.

Venue: Papariano, Giardino delle Scuole, via Nazionale [how to get there]

Fraction of the municipality of Fiumicello Villa Vicentina, recognized his identity when in 1937 the first stone of the church dedicated to Maria S.S. Regina was blessed. The building, simple and collected, was built for the tenacity of two priests, with the money and work of the entire community of Papariano, in which, after the suppression of the small family church of Andriani, commissioned by Giuseppe II, there were no places of worship. Fiumicello, born as an agricultural village of the prosperous Roman colony of Aquileia, owes his name to the Latin word flumen and mentioned for the first time (Fiumisèl) in an act of 1174. His history is intimately linked to that of Aquileia: with it it suffers the devastating invasions of the Huns, the Visigoths, the Ostrogoths, the Avars and the Longobards; with this, Papariano sees the advent of Christianity and the establishment of patriarchal power.