Friday 28 June will be the turn of three groups from three different nations: the Irish Sonas in Cercivento at Cjase da Int (at 9.15 pm), the Italian Maxmaber Orkestar in Fiume Veneto at Piazza P. Bagellardo (at 9.15 pm), and the Italian-Colombians Mestisòn in Tricesimo in Piazza Ellero (at 9.15 pm). 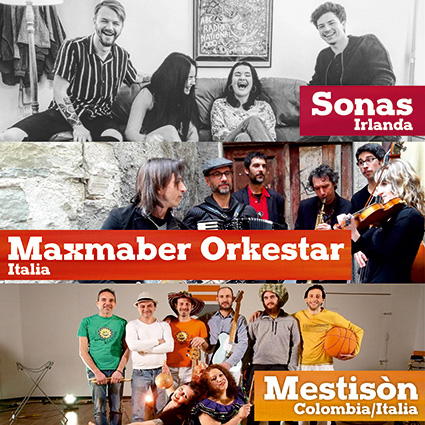 In Cercivento the Irish Sonas will perform, a group formed by some of the most interesting young Ulster talents, winners of various competitions and of an All Ireland Young Championship. Some of them come from families that have given great interpreters to the Irish music.

In case of bad weather the concert will take place inside the Cjase da Int.

Cercivento rises at the confluence of Valcalda with the But Valley. It is divided into the inhabited areas of Cercivento di Sotto and Cercivento di Sopra and in the towns of Vidal, Cjandelin and Costa. It was a Longobard presidium and the site of a ”parish church”. Between the end of the sixteenth and the eighteenth century Cercivento knew perhaps the most flourishing moment of his history: in this period the most beautiful houses were born, including the Citars, Tiridin, Morassi, Vezzi and Pitt houses. However, economic growth arrested, at least momentarily, in 1692 – the so-called year of the flood – when a huge landslide buried the village of Centa, which stood behind today’s cemetery. In the eighteenth century the current parish was built. In 1966, due to numerous and violent rains, the Farie di Checo, the forge manufacturing symbol of the country, ceased his activity. Although damaged by the earthquake of 1976, the country with the reconstruction has preserved the typical features of the splendid historic houses that, together with the thematic artistic project Cercivento… an Open-air Bible, are a source of interest for a nascent cultural-religious tourism. Secular traditions are preserved, such as the blessing of flowers at St. John or the singing of the Cantors on December 31st. Finally the enchanting landscape of the valley floor and of Mount Tenchia, where located the celebrated Pian delle Streghe.

The Maxmaber Orkestar was formed in 2003 in Trieste, the Austro-Hungarian port where Mitteleuropa meets the Mediterranean, a natural passage between Eastern and Western Europe.

They left immediately for a journey through the popular traditions of Eastern Europe and of the Mediterranean: klezmer, old Italian and Yugoslav songs, waltzes and mazurkas, Roma music, Bosnian sevdalinke, dances from Serbia and Macedonia intertwined in a cheerful and melancholic sound at the same time. From all these experiences, several original pieces were born, sung in the Triestine dialect.

Venue: Fiume Veneto, Piazza Bagellardo [how to get there]

In case of bad weather the concert will take place at the Sala Parrocchiale in Pescincanna.

The municipality is bathed by two main streams: the Fiume river, from which the municipality takes its name, which laps Pescincanna, crosses the chief town and touches Cimpello, and the Sile river, which flows along the south-eastern strip of the territory touching Bannia and Praturlone. Both are born a few kilometers further upstream, coming from the same resurgence area; furthermore, Fiume is rich of such phenomena, as evidenced by the toponym via Sacconi, derived from the term “bag” which stands for “stagnant water”. The toponym is documented for the first time in 996, but the first certain records date back to 1182, when Pope Lucius III recognized it as belonging to the abbot of Sesto al Reghena. In the subsequent writings is revealed the existence of two distinct centres: “Flumen intra acquae” or “Fiume Grande” or, again, “Fiume dei Servi”, fiefdom of the abbey of Sesto; and “Flumen extra acquae” or “Fiume Piccolo”, administered by the cesarean captain of Pordenone on behalf of the House of Austria.

Mestisòn are an explosive mixture of rhythms, songs, dances and ethnicities where traditional drums and minor percussions blend wisely with more modern instruments such as bass, sax and clarinet, giving life to rhythms such as cumbia, sòn corrido, mapalé, sòn palenquero, bullerengue and many others.

They offer characteristic songs from the Colombian Caribbean coast, rearranged in a modern key and with reggae and funky influences, using the Spanish and indigenous language of San Basilio de Palenque.

Venue: Tricesimo, Piazza Ellero [how to get there]

In case of bad weather the concert will take place at the Teatro Comunale.

The name of Tricesimo is of Roman origin: “ad tricesimum lapidem” means “to the thirtieth milestone from the port of Aquileia”: it is located on the road that led from Aquileia to Julium Carnicum, today Zuglio, and to the Norico. The presence of centres of Celtic origin before and during the Roman domination are represented by the toponym “Borgobello”, in Friulian Borgobel or Marcubel, the hill that overlooks the center of Tricesimo, anciently seat of a place of worship dedicated to the god Beleno. The strategic position, at the intersection between the road that leads to Norico and the bariglaria road, coming from Gradisca d’Isonzo, has favored over the centuries the influx of population, trade and commerce, making Tricesimoone of the most important administrative and religious centers of the hilly Friuli. The parish church, built in the XVIII century based on a project by Domenico Schiavi and dedicated to the Madonna della Purificazione, stands in the center of the town, opposite to the town hall and to the square, and has, in the south side, a very elegant Renaissance door, by Bernardino from Bissone. Inside there are various works of art by Jacopo Palma “il Giovane”, and an altarpiece by Sebastiano Bombelli. The church was also named after an organ by the famous organist Pietro Nacchini, sold in the 1930s to the parish church of Madrisio di Fagagna, where it still stands today.