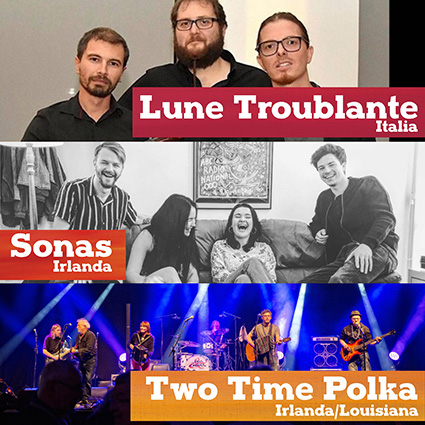 At 7.30 pm in Spilimbergo at the Eastern Tower, in collaboration with CRAF, Lune Troublante will perform. A trio or quartet of jazz/swing or jazz/manouche music composed by musicians from different musical realities, united by the musical passion for the 40s French swing.

The trio or quartet is based on the classics of the Gypsy-Jazz tradition, a musical genre born in the 1940s in Paris thanks to the gypsy guitarist Django Reinhardt and the violinist Stephan Grappelli in the group Quintette du Hot Club de France, which together united the American jazz-swing with the French folk music.

Music is therefore blood and complex, full of rhythm and improvisational virtuosity. And the repertoire of the Lune Troublante ranges freely through the jazz/manouche classics (the compositions of Django Reinhardt, the French waltzes/mousettes of the time), and the standards of American jazz (Duke Ellington, Gershwin, Porter, etc.).

The show wants to be a music tribute to the formidable guitarist Django Reinhardt, retracing his story also with the help of short anecdotes and stories that contextualize his compositions in a particular historical moment.

Over the years, Lune Troublante have also developed an original repertoire that blends the gypsy tradition with a more modern elaboration of great rhythmic variety, melodic and with lyrics in Italian.

The group differs itself from the others by the use of tools similar in terms of workmanship and type to the original instruments of the time, in particular to the amazing Selmer/Maccaferri guitars.

Venue: Spilimbergo, Torre Orientale [how to get there]

The small town near Pordenone was made of capital importance in the music scene by the presence of Folkest, but was also the birthplace of neo-realist photography and the famous mosaic school, where new talents are born every year. The town and many of the hamlets are dotted with monuments. The cathedral, a rare example of gothic architecture from Friuli, is rich in both paintings and sculptures, and the nearby castle that belonged to the dukes of Spilimbergo deserves adequate attention too, as Corso Roma does: a boulevard that runs through the ancient gate of the castle walls with its two towers. The San Giovanni Battista church and its realistic crucifiction scenes, the San Giuseppe and San Pantaleone churches, the San Antonio Abate church in Barbeno, the parish in Tauriano with St Cristopher painted on the facade, the parish in Baseglia with frescos by Amalteo and the sculptures by Pilacorte in the Gaio church make Spilimbergo une of the artistically richest communes in Friuli. Heavily industrialized after World War Two, it is now the reference point for a wide area on the right bank of the Tagliamento.

At 9.15 pm, the Sonas will perform in Artegna at the San Martino Hill. A Northern Ireland group, formed by some of the most interesting young Ulster talents, winners of various competitions and of an All Ireland Young Championship. Some of them come from families that have given great interpreters to the Irish music.

Last date of Sonas for Folkest 2019 will be on Sunday 30 June (at 9.15 pm) in San Giorgio della Richinvelda in the garden of the Civic Library.

Venue: Artegna, Collina di San Martino [how to get there]

In case of bad weather the concert will take place at the Teatro Lavaroni in piazza Marnico.

Placed on the left side of the vast Tagliamento vale, right between the southern slopes of mount Cuarman and the western slopes of mount Feeit, Artegna takes a “heart shaped figure”, as Baldissera wrote in the early ‘900. Its origins are ancient: both substancial celtic settlements and roman trade hubs were found here. Near the town center, it is possible to visit the Parco delle Rose (Rose Park) with its extraordinary all-year blooming. Passion and history alike are fundamental parts of the enogastronomic tradition too, especially norcina, recognizable for the remarkable and “timeless” taste of its products, celebrated in late November with the traditional Festa del Maiale (Pork Fair) that takes place all around town and involves the whole community.

In the meantime, in Flaibano, at 9.15 pm in Piazza Monumento, there will be the Two Time Polka show. An explosive mixture of cajun, bluegrass, rock’n’roll and songs with a strong social commitment: with five albums, Two Time Polka have repeatedly climbed the Irish radio charts and won the Best Musical Act, voted unanimously from Irish festival organizers.

The last date of the group will be Sunday 30 June in Aquileia in Piazza Capitolo at 9.15 pm.

Venue: Flaibano, Piazza Monumento [how to get there]

In case of bad weather the concert will take place at the Impianti Ricreativi area.

The commune is placed in the middle Friuli, on the higher corner of the Friulana plain. The main waterway, the Tagliamento river, is the western border of the municipality, and its banks are part of the Tagliamento reserve. Various roman –time relics remain, mostly villas and storages. The name comes from the latin Flevienus, a roman citizen who settled the place right after the birth of the town of Aquileia. Many buildings all around the commune are artistically relevant and some of them still retain exemplar works from influential painters and lapicides. Villa Marangoni Masolini in San Odorico, built close to the gravelly banks of the Tagliamento, is also worth mentioning, It once was a benedictine monastery that managed the abbey and the ford, and collected the toll.