The last two events of the month of June will be held in Aquileia and in San Giorgio della Richinvelda. 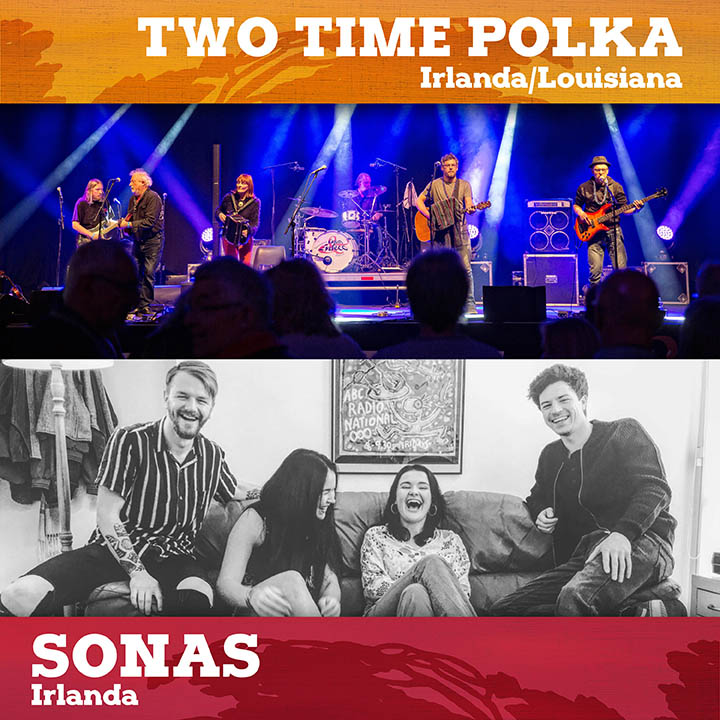 The first group, Two Time Polka, will perform on 30 June in Aquileia at the Piazza Capitolo at 9.15 pm. An explosive mixture of cajun, bluegrass, rock’n’roll and songs with a strong social commitment: with five albums, Two Time Polka have repeatedly climbed the Irish radio charts and won the Best Musical Act, voted unanimously from Irish festival organizers.

Venue: Aquileia – Piazza Capitolo [how to get there]

In case of bad weather the concert will take place at the Sala Romana.

Roman colony founded in 181 aC, was the capital of the X Augustan region and metropolis of the Christian church. Together with Ravenna and Brescia it is the most important archaeological site in northern Italy, and with Cividale del Friuli and Udine it has been one of the historical capitals of Friuli, whose iconic image derives from the emblem of Aquileia.The village developed around the patriarchal basilica for a radius of about a kilometer, including the remains of the ancient Roman city, and crossed by the river Natissa. The southern part of the municipal territory, behind the Grado lagoon, is instead constituted by cultivated territory (deriving from reclamation) or small patches of plain woodland. The hamlet of Belvedere, facing the lagoon, hosts two typical examples of pine woods.

The second appointment will see the Irish Sonas in San Giorgio della Richinvelda at the garden of the Civic Library at 9.15 pm, always on 30 June. A Northern Ireland group, formed by some of the most interesting young Ulster talents, winners of various competitions and of an All Ireland Young Championship. Some of them come from families that have given great interpreters to the Irish music.

Venue: San Giorgio della Richinvelda – Giardino della Biblioteca Civica [how to get there]

In case of bad weather the concert will take place at the Auditorium of the Civic Library.

The perimeter of the municipality is drawn to the east by the Tagliamento river and by the Meduna river to the west: thus, it is a natural and uncontaminated territory, rich in protected flora and fauna. The Municipality hosts one of the most important sacred places in Friuli, the “Richinvelda”, where the greatest among the Patriarchs of Aquileia, Bertrando of Saint Geniès, was assassinated. Along the road that leads from Spilimbergo to Zoppola, between the towns of San Giorgio della Richinvelda and Rauscedo, stands the small church of San Nicolò where the patriarch of Aquileia Bertrando died on 6 June 1350. The little church preserves an altar of Pilacorte and in the immediate sorroundings, in the exact place where he was assassinated, there is a memorial stone erected in memory of the event, visible near the church. Rauscedo is a fraction of the municipality and is known for the production of “barbatelle” (small graft vines). In the hamlet of Pozzo there is the museum of the rural civilization, with a collection of instruments of the past, typical of the rural community.