On Thursday 4 July a double date with two bands, one from Ireland and one from Scotland. 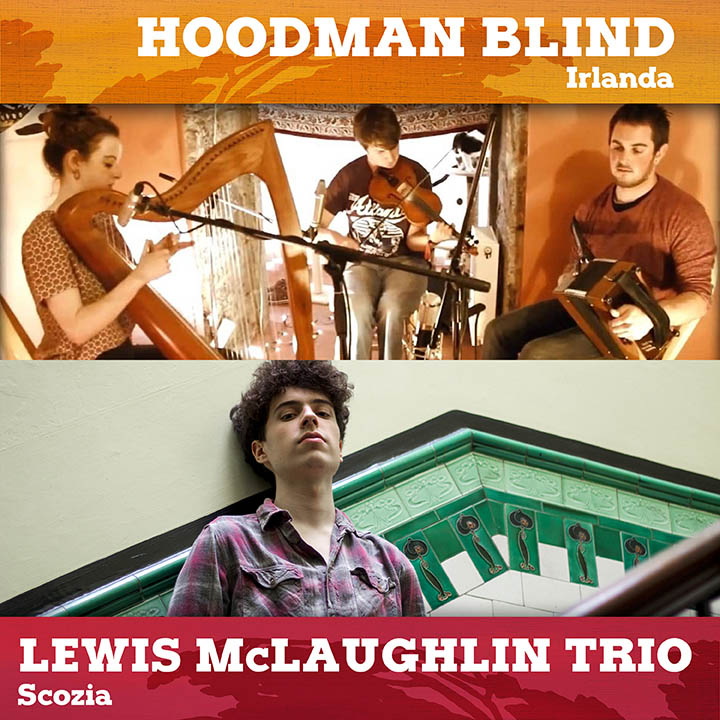 In the square of Colle (Pinzano al Tagliamento) at 9.15 pm there will be an appointment with the Irish Hoodman Blind. The young trio from Limerick, in the County of Clare, which is one of the richest in terms of music, was formed in 2016. They immediately inserted their great love for the music of Finland and Sweden in their compositions, that alternate with traditional Irish songs. In these few years they have been able to build a solid reputation, which has led them to perform at the top festivals Other Voices and Electric Picnic, as well as the Kaustinen Festival in Finland.

Last date with the band will be in Spilimbergo in Piazza Garibaldi on Saturday 6 July at 10.10pm.

Venue: Colle (Pinzano al Tagliamento), Piazza [how to get there]

The municipality of Pinzano al Tagliamento is located in the middle valley of the Tagliamento river. The western part of Pinzano laps the Val Cosa, meanwhile the north-eastern part is located in the lower Val d’Arzino. The geographical position of the territory is of particular naturalistic value. The town is known for its bridge over the Tagliamento river, from which you can enjoy a spectacular view. The territory was seriously affected by the earthquake of 1976, subsequently receiving the “Gold Medal for Civil Merit” for the perfectly successful reconstruction and restoration of works of art. Colle is a small town situated on a hill, not far from the confluence of the Arzino river in the Tagliamento, and is two and a half kilometers awaynfrom the chief town. Due to its position, it was the scene of a conflict during the Retreat of Caporetto: at that time there was a wooden footbridge over the Tagliamento river, at the height of the hamlet of Pontaiba, which was used both by the Italians and by the Austro-Hungarians. It houses a small church dedicated to the Immaculate Virgin, built in 1845 in order to replace an 18th century oratory dedicated to San Sebastiano and San Antonio. In 1964 the church was restored and equipped with a bell tower with three bells.

Meanwhile, again at 9.15 pm in the Piazzetta of the Fountain in Prato Carnico, the Scottish Lewis McLaughlin Trio will perform. Lewis McLaughlin is a young folksinger and multi-instrumentalist from Leith (Edinburgh). Raised in direct contact with Scottish musical traditions, he is influenced by John Martyn, Bon Iver, Tom Waits and Dylan.

Live his guitars mix with the accordions and violin of Ewen White and Alastair Hambrey in an exciting mixture of traditional songs alternated with new songs and compositions.

Venue: Prato Carnico, Piazzetta della Fontana [how to get there]

In case of bad weather the concert will take place at the Auditorium in Pieria.

Prato Carnico is the main town of the Val Pesarina (Pesarina Vale) area, and typical houses that sometimes share a resemblance with venetian palaces, since the Venetian Republic used to collect timber from the area for its shipyards, are common in both the town and the surrounding hamlets. The roofs are tiled with a unique kind of flat terracotta roof tilings shaped like the small wooden bits that are commonly used to tile roofs in the mountains, here called “las planelas”. Pesariis is the most notable village, known for the skill of its watchmakers since the XVII century. Truia is just a small hike away from Stavioli Orias, one of the most fascinating places in Val Pesarina: here, more than a dozen of ancient farmsteads that used to serve as kettle shelter are still present.