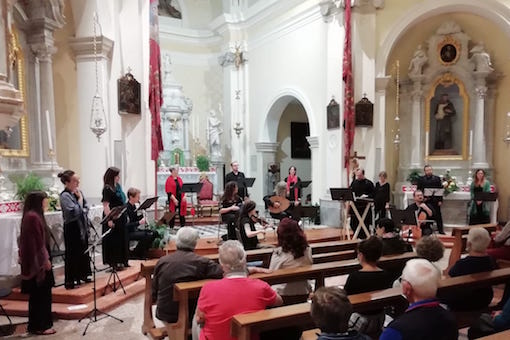 This is not the first time that the FVG Choir has pursued the search for new forms of expression. Leaving the traditional groove of classical music is the result of a continuous desire and curiosity that is peculiar to it. Projects with singer-songwriters (Cristicchi and Tosca) jazz musicians (K. Weehler, J. Taylor, J. Surman, M. Stockhausen etc.) and ethnic musicians (J. Gasparyan) have always represented a form of cultural and human growth. Entrusting oneself to Alexander Karlic’s care to immerse oneself in a new, far away, fascinating, archaic and spiritual world is pure lifeblood that has made this exciting collaboration flourish.

Born in 1968 in Yugoslavia, he comes from a family that has cultivated both Western classical music and the extremely varied musical traditions of that country for generations. Graduated in lute and baroque guitar he devotes himself to oud and other oriental lutes, traditional percussion, as well as the use of voice. He received many important musical influences in different countries, but his training was definitely marked by Giacomo Baroffio (Cremona) Bekir Baaloglu (Istanbul), Vangelis Merkouris (Athens), Elat Gabbay (Jerusalem) and Nikola Popmihajlov (Belgrade). At the same time he cultivates interests in anthropology and history of religions, with particular reference to the Middle Eastern and Balkan area. A multifaceted and curious artist, he has always been particularly sensitive to dialogue and to a possible synthesis between East and West, trained purely in music but always attracted by the theater, Aleksandar Karlic collaborated from 1994 to 2001 with Moni Ovadia in his famous TheaterOrchestra as a musician-actor. Subsequently, the collaboration with the famous Bulgarian Jewish artist continued with various other projects, including the show-concert Shir del Essalem – Songs for Peace, four hands with Ovadia, which also sees the presence of the great Palestinian singer Faisal Taher.
In 2008 he edited and performed (together with Dario Fo) the music for the television version of Fo’s lesson-show Il Tempio degli Uomini liberi, at the Duomo of Modena. Together with his Theatrum Instrumentorum and Moni Ovadia, he presented an intervention dedicated to the ancient Jewish-Sephardic music in prime time on RAI 1.
Creator and co-author of the show-concert Jerusalem Lost, based on the homonymous book by Paolo Rumiz and Monika Bulaj (ed. Frassinelli), directed by Graziano Piazza, which debuted with great success at Ravenna Festival, 2011 edition.