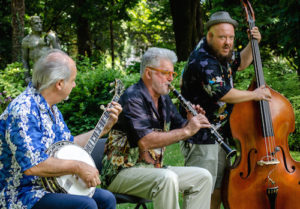 A repertoire focused on the music of the twenties and thirties, between New Orleans and Chicago, songs made famous by the great Louis Armstrong, William Christopher Handy, Jelly Roll Morton, Benny Goodman, Fats Waller, Louis Armstrong and Duke Ellington.

Daniele D’Agaro, began his professional music career in Holland where he recorded more than 90 cds, performing in Europe and the United States. For many years he has been a member of Franco D’Andrea’s trio, the Berlin orchestra Globe Unity and leads several of his own ensembles. In 2007 and 2008 he won the Top Jazz national critics’ referendum as best sax and clarinet and in 2010 he won the Jazzit Award in the clarinet and orchestra category with his Adriatics Orchestra.

Denis Biason has a rich musical career in classical, flamenco and jazz music with several tours in Russia, China and Japan, while Marzio Tomada is a young talent from Udine with an intense national concert activity.