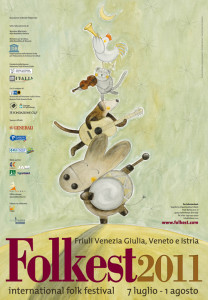 Like it or not, even during hard times of crisis like 2011, folk have had their audience and folk music has been transported to new functions.

It has led us to reason about our land, which does not mean only about the cultures, but also about the future emergencies we will be facing: firstly, therefore, a correct water culture, the new frontier of humanity. Not only in the desertified areas of the earth, but also in our rainy Friuli and in the whole Europe.

For this reason we have worked on a series of projects together with prestigious partners such as UNESCO and the International Center for Water Civilization for a series of interventions, already started in 2010 with the Drava river, which continued with the production of a suite musical dedicated to the Sava, presented in Brdo in Slovenia, which was the subject of a single, exceptional August evening in Fontanafredda.

For this reason, we have also started a series of collaborations with other events that have a similar sensitivity, such as the Guitar Rendez-Vous of Pieve di Soligo and Conegliano.

Introducing this Folkest 2011, we cannot forget Carnia, a historical region, which was already the cradle of the project of cultural decentralization that we innovatively implemented in 1980, see again a strong presence of Folkest shows, as well as the Bassa Friulana: these are two areas that suffer a bit of neglect, given the renewed tendency towards cultural urbanism recently noted in the region.

By touching and collaborating with the whole territory we have given life since 2011 to a series of meeting points, promotion and information, of the Folkest areas active all year, which will be called Folkest Point.