Double performance on Thursday 5 July at the former Malnisio hydroelectric plant (Montereale Valcellina). It starts at 9.15 pm with Stona, the stage name of the project by Massimo Bertinieri, recent winner of the Biella Festival with the song Belladonna made with the elegant and refined production of Guido Guglielminetti, historical bassist and producer of Francesco De Gregori’s musical projects, as well collaborator, among others, of Battisti, Mina, Bandabertè, Ivano Fossati, Umberto Tozzi, Mia Martini.

Following the Istrian group Vruja, which continues the tradition of Slovenian and Croatian Istrian music, proposing songs and dances of all the ethnic components present in the peninsula, from the singing to two voices of south-eastern Istria to the villagers, the ballads in savoy northern area and the istroveneto songs. 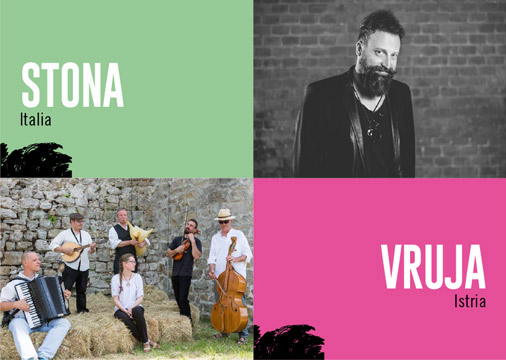 Situated in the final part of the Pordenonese Padana plain, in between the Cellina river, the Fara and the Spia mountains, although its small dimensions, Montreale Valcellina bears old origins. Malnisio is an hamlet that belongs to Montreale, in the province of Pordenone. In Malnisio findings dating back to the Bronze Age and to the first early Iron Age were found. They concretize the fact that the human settlement has been existing since the XIV century BC. Furthermore, several findings dating back to the Imperial and late-Roman Age put under the spotlight the entire area.