The concerts of the fortieth edition of Folkest continue in the squares of the region and, until next 5 July, brings together over 25 Municipalities artists and musicalities from all over the world to then seal this fortieth edition in Spilimbergo with a four days of music, meetings and presentations editorials from 6 to 9 July next.

The “Folkest caravan” is expected on Tuesday, July 3, 9.15 pm in Artegna with a double appointment in the name of Italian bands. 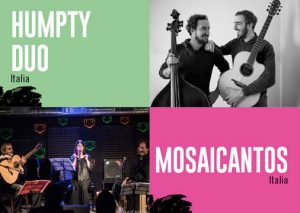 We start with the Humpty Duo where a double bass and an acoustic guitar meet and dialogue in a new and effective way, giving life to an unusual and modern jazz. Their very special acoustic groove (Luca dal Sacco on guitar and Matteo Mosolo on double bass) has already been noted in important events such as Umbria Jazz, Udin & Jazz, Jazzit Fest: their new album, Synchronicities, has just been released, in which they revisit the music of Sting.

The Mosaicantos, a recently formed trio with the Cancion Mujer show, is a special dedication to all women. The songs come from the Spanish-American, Andalusian, Iberian, Sephardic, Italian culture with some incursions of original themes. 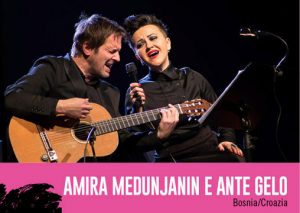 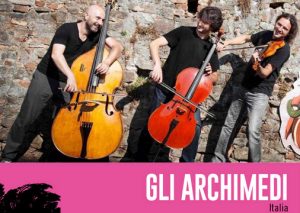 Three appointments in as many regional locations for the evening of Wednesday, July 4th, all starting at 9.15pm. The beautiful voice of Bosnian singer Amira Medunjanin, Billie Holiday from Bosnia, awaits at the Municipal Palace Park in Gorizia. Born in Sarajevo in the seventies, today she is the only interpreter of Slavic language capable of exporting her country’s traditional music outside its borders. Amira is the largest exponent of sevdah, the folk music of Bosnia and Herzegovina, a genre closely linked to its culture, in the same way as the fado in Portugal or the morna in Cape Verde. “The sevdah is difficult to define,” explains Amira. “It’s not just musical tradition, but a lifestyle, the reflection of memory, and sevdah’s songs, tell the beauty of life, desire, but also sadness, melancholy, the abyss of despair “. It will be accompanied by the guitar of Ante Gelo, one of the most influential producers of the Croatian jazz scene, as well as an excellent guitarist and performer.

Also on Wednesday in Zompitta – Reana del Rojale, the Italian group Gli Archimedi is a chamber lineup with the utopia of improvisation, which moves through different genres and musical styles, from classical to folk through jazz, ancient music and others still generate. Andrea Bertino on violin, Luca Panicciari on cello and Giorgio Boffa on double bass. 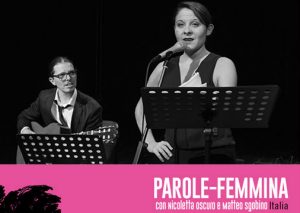 In San Daniele del Friuli’s Library garden, on Wednesday at 9.15 pm, the Parole-Femmina performance with Nicoletta Oscuro and Matteo Sgobino is a “playful dialogue between words and music for brave women and kind men“. A story made up of many stories, a polyphony of female voices that resonate with grace and irony between the melodies of the popular repertoire and Italian songwriting. A genealogy made up of mothers, daughters, grandmothers, grandchildren, aunts and sisters united by doubts, desires, joys, longings, fragility, courageous decisions, sentimental delusions, stubborn choices and above all by an astonishing desire to live.

Double performance on Thursday 5 July at the former Malnisio hydroelectric plant (Montereale Valcellina). It starts at 9.15 pm with Stona, the stage name of the project by Massimo Bertinieri, recent winner of the Biella Festival with the song Belladonna made with the elegant and refined production of Guido Guglielminetti, historical bassist and producer of Francesco De Gregori’s musical projects, as well collaborator, among others, of Battisti, Mina, Bandabertè, Ivano Fossati, Umberto Tozzi, Mia Martini. 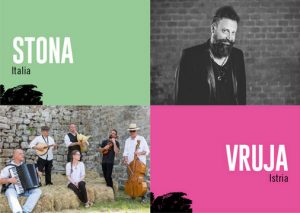 Following the Istrian group Vruja, which continues the tradition of Slovenian and Croatian Istrian music, proposing songs and dances of all the ethnic components present in the peninsula, from the singing to two voices of south-eastern Istria to the villagers, the ballads in savoy northern area and the istroveneto songs.

Folkest ends between 6 and 9 July in Spilimbergo for the great “Folkest Festival” with concerts, great protagonists of the international scene, editorial presentations and guests.