The musical project “Tapestry”, which will be presented July 8th 2017 in Piazza Duomo during one of the last nights of Festival Folkest in Spilimbergo, was born out of the will to work together of Folkest and the Gottardo Tomat musical association, together with its Music Courses. The two entities were actually collaborating for the last few years, organising shows and events in the commune area, promoting the activity Vieni a provare uno strumento (try an instrument) too.
This project will be focused on the Modern Music section of the school, consisting of both teachers and some selected students with a singer chosen by Folkest, and it’s an attempt to create a project-concert that will be showcased to the audiences during the Spilimbergo shows. After careful pon-dering, the decision was made to work on a highly artistic value, in line with the contents of the festival, accessible to the public but also of didactic value for the students. The project was then an attempt to recreate the classic 1971 record Tapestry, by New York singer and author Carole King, an artist recognized for her pop efforts but versed in Rhytm&Blues and Folk too. Tapestry is a fun-damental work for the american post- Wold War Two music history, winner of four Grammy Awards, one for Record of The Year and one for Best Female Interpreter, a record that sold 22 mi-lion copies and established the golden age of intimate and auto-biographical singer-songwriters.
An extraordinarilly refined masterwork of clarity and elegance, where the vocals and piano of Ca-rol King, the true protagonist of this work, are of central importance. This records perfects the format of sentimental ballads (So Far Away, You’ve Got A Friend and Will You Still Love Me Tomorrow?), but also jazz and R&B infused pop (I Feel The Earth Move and It’s Too Late) and gospel (Way Over Yonder and A Natural Woman). Anther proof of the huge importance of this record is that many important artists played their own versions of the songs on this record, for example Manhattan Transfer, Aretha Franklin, Rod Stewart, The Byrds, Neil Diamond, Linda Ronstadt, Blood Sweet & Tears, Billy Joel, The Animals, Tina Turner, Celine Dion, Bee Gees, Amy Grant o James Taylor. 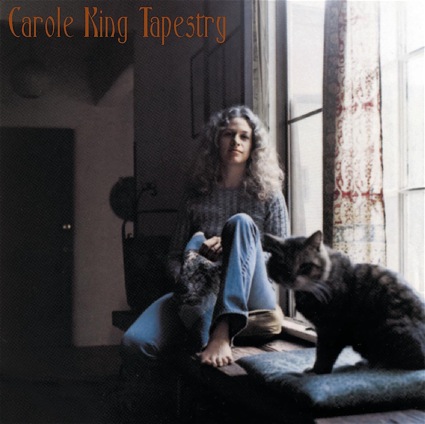