Continue until 9th of July the concerts in region’s squares

Continue until 9th of July the concerts in Region’s squares that bring toghether, in more than 25 Municipalities, artists and music from all the world.
The international folk festival celebrates his first forty years enhancing different kinds of music, folk, world music, jazz, in a sequence of appointment from Italy, Scotland, England, Belarus, Ireland, Australia, Netherland and Sweden.

On Friday (29th June) Folkest is in Aquileia – Piazza Capitolo with two different groups: the Ashcroft, trained by two talented musician, Euan and Lewis McLaughlin and the duo Stewart Hardy & Frank McLaughlin, which in Folkest presents their new album “The Gift”.

Also on Friday at 9.15 p.m. in San Urbano square, (Pozzo di San Giorgio della Richinvelda), two Italian groups will perform  Fran & The Groovies – formed by Francesca Garavelli, in arts Fran, and her Groovies (Francesca Soliveri e Stefano Conti) – which propose an acustic Folk-Pop style and Allegra Gente, a group that sink their roots in the authentic italian tradition, with a special attention to the South America rhytm.
In the same night the duo Russell Joslin and Sarah McCaig will perform in Sauris. 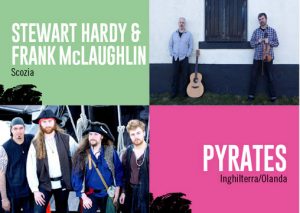 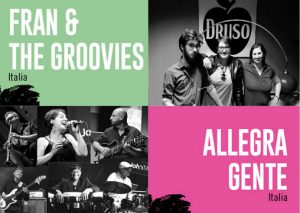 On Saturday 30th of June in Papariano (via Nazionale) the Ashcroft will perform again liners by Serena Finatti that will presents her last work “Fragile e Fiera”.

Also Saturday in Flaibano in Monumento square there will exhibit Stewart Hardy & Frank McLaughlin and Pyrates, from Netherland, an unusual ship of musicians that like pirates propose sea shanties inglesi, Irish maritime songs, drinking songs, traditional dances and new compositions made ironic and fun by an electric crew. 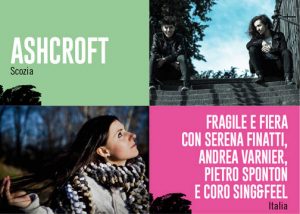 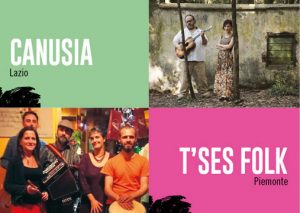