Closing the lines and starting again with renewed enthusiasm, the Folkest staff has put on the table a festival of strong impact that has ranged from tradition to the most stringent innovations, without forgetting the author’s song. 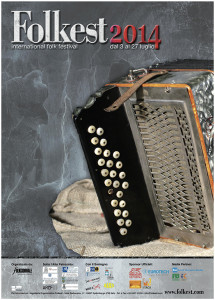 The numbers of Folkest 2014 were all respected:
28 locations reached
45 musical groups
198 artists
24 technicians
… and the extraordinary people of Folkest, the affectionate public that has been following him for thirty-five years.

There was really something for everyone at Folkest 2014;

the popular festival, as in the preview with Vinicio Capossela and the Banda della Posta which was hosted at Villa Manin; the popular song of the author in Capodistria with Edoardo De Angelis, for once without Lella; the folk prog of the stainless Osanna led by Lino Vairetti and David Jackson; the twenty-years-old Modena City Ramblers combat-folk; the fascinating voice of Cristiano De André; the psychedelic country rock of the Branco Selvaggio; the incursions into the Mediterranean of the Daramad; the youthful folk-rock of the Aosta Valley L’Orage; the colors and rhythms of Sicily of the Unavantaluna, winners of the Parodi Prize in Cagliari; the Bevano Est; the Morrigan’s Wake; the very young Northern Irish talents Le Chéile; and to end up the Elvenking dreamy folk metal, finally prophets at home.

Really thick was the regional patrol that saw the debut of Serena Finatti, in the odor of a new record with great potential.

And then a flurry of very high-quality groups from the Suonare@Folkest competition, which saw the presence of artists of absolute level.