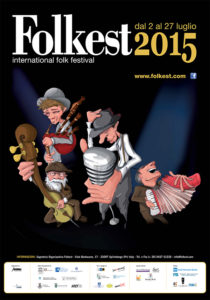 Last year Folkest offered a reflection on the renewed taste for the discovery of the new and of the different, which led us, beyond any fashion exoticism, to confront ourselves with the renewed passion for our roots, with the deep culture we inherited from the generations that have preceded us.

The 37th edition of Folkest has visited the whole region, almost for a month, in dialogue with Istria, bringing the best of the popular music of the five continents everywhere and reserving a big space to the regional music.

Playful and festive shows have alternated more reflective moments, entrusted to songwriters who draw inspiration from their roots and from the soloist art of rare and unusual instruments, in a succession of songs in different languages ​​which tell common stories, in particular stories of simple people that belong to everyone and are part of the people’s cultural pride.

A great artistic laboratory capable of attracting the attention of all Europe and proposing two specific moments of reflection.

The first is about the many cultures present in the Alpine Arch, in the various forms of music and popular culture.

The other on the quality of the most famous shows for the general public: starting from Neri Marcorè to Elliot Murphy, from Bella Ciao to Hevia, from New Trolls to Rudi Bučar, from Vincenzo Zitello to Eugenio Finardi, from Angelo Branduardi to Uriah Heep.

This is not a small thing!