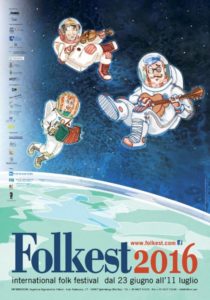 FRONTIERS – The frontier is reached through sunny paths and routes in the forest, but it is also a place for the exchange of narrations, where sea and land divide, where people meet and mix, a human space not dictated by the institution.

The wood of the houses and of the instruments, the scents of the kitchens, the colors of the frescoes in the churches and on the houses, an ancient wisdom that transmigrates where the pastures, the orchards, the houses, the violins and the harmonics are the same, beyond here and beyond the border imposed by men.

We went to the discovery of a mestizo Europe, not by now, but since always, by its vocation, a Europe of peoples, but also of their intersections, of millenary migrations. Because, in the end, none of us is truly European: we are all children of migrants!

The 38th edition of Folkest has crossed the whole region, almost for a month, talking to Istria, bringing everywhere a well-considered choice of musical examples which tell us the boundaries of our Old Continent in a succession of songs coming from cultures ranging from Magna Graecia to Finland, which narrate ancient legends and common stories, stories of heroes and of simple people that belong to all and are part of the cultural pride of the folks. Often, these are the same stories but just declined in different languages.

We saw the frontiers of the Mediterranean Sea meet on the Neapolitan shoreline: a reflection on the extraordinary contaminations that this millenary city has given us, the joy of making music of the Nuova Compagnia di Canto Popolare, of the Almamegretta and of James Senese Napoli Centrale. We listened to the ancient ballads and modern songs of Richard Thompson, the poetic ideas of Suzanne Vega, from that significant New Europe represented by the Village of New York, the singing incursions in the Apennines of the Viulan, the gypsy sounds of Maurizio Geri Swingtet and Roberto Durkovic and the Fantasisti del Metrò, the klezmer of the Bailam Orchestra, the border songs of Rudi Bučar, the Mediterranean of the big islands with the Tama Trio and the charm of Sardinia with Elena Ledda and Luigi Lai. We saw a new Europe, falling in love with the songs and dances of Saba Anglana and Sandro Joyeux.