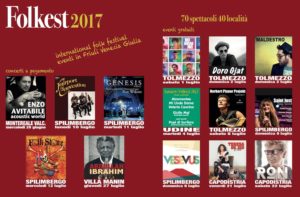 Udine, Spilimbergo, Villa Manin, Tolmezzo, Udine, but also Capodistria and Slovenia have welcomed, like every year, the itinerant caravan of Folkest, a multicolored festival with very different artists who told us ancient legends and common stories, sagas of heroes and stories of simple people that belong to everyone and are part of the cultural pride of the people, even though often they are the same stories but just declined in different languages. Gods, demigods, unleavened bread and black bread…

We went to the discovery of a mestizo Europe, not from now, but since always, by its vocation, with strong roots in the Mediterranean basin, with a focus on the city of Naples and its complex cultural, multi-ethnic network, Neapolitan for vocation and uniqueness of musical inspiration. So here we are with a series of great Neapolitan artists, led by Enzo Avitabile, winner of two David di Donatello Awards, Teresa De Sio, the VESEVUS project with Solis String Quartet, Gianluca Brugnano and Giovanni Falzone, Jenny Sorrenti with Saint Just and more young people, Vianova and Suon&Passion.

The world of the Anglo-Saxon song was not missing with the principles and inventors of the British folk-rock Fairport Convention, awarded with the Folkest Career Prize, and the voice of Genesis, Ray Wilson, as well as the space for the new frontiers of folk-metal, with the Folkstone from Lombardy and, as usual, for the great Italian songwriting, with Ron.

There was no lack of sounds and melodies of Celtic tradition and inspiration, a section that is never missing at the festival, as well as the border music, from the manouche to the Balkan, to the klezmer, to the blues.

Significant preview in Ospedaletto in Gemona: an all-female evening with the presence of Ambra Pintore and her quartet (already absolute winner of Suonare@Folkest in 2015), and gave space also to the very young Martina Iori, a Ladin from Trentino.

Finally, the broad chapter of the new Italian proposals with the appointment of Suonare@Folkest. On July 4th, for the second time after last year’s organizational success, the final evening of the Suonare@Folkest competition was held at the Udine Castle, which saw the birth of the new collaboration between Folkest and the Fabrizio De André Award in Rome. Guests of honor, called to conclude the evening, the Sicilian Pupi di Surfaro, winners of the Andrea Parodi Prize of Cagliari in 2016.

The presentations of some book novelties, meetings and public debates have been a corollary to the most spectacular moments of the festival, representing an ideal completion.