Franco Presti and Taranterrae in Porcia

Thursday 28, in Porcia – Villa Correr Dolfin, a night dedicated to italian artists, Franco Presti, which have started his path with acustic guitar then join the electric and semi-acoustic, approaching different genres, from folk, to rock up to jazz music and the group etnic-popular Taranterrae, trained by twelve components that proposes a repertoire linked to the tradition of popular folk songs with archaic voices, rich in glissati and modal ambiguities.
Among the styles that the group presents are the Villanella, the dance ‘ncoppe’ ‘or tammurro, the Tarantella, the Fronna, the Moresca, the Ballarella. 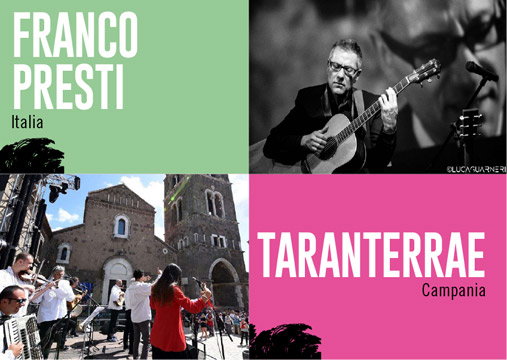 Place: Porcia, Villa Correr [How to get there]

Charming town that has retained an almost intact historic core, with some high-interest elements, as well as an enviable natural heritage related to water. In the area, there are numerous prehistoric settlements of ​​the Bronze Age and Iron Age, especially Santa Rufina di Palse, where it has been recently discovered a paleo Venetian village. The castle, documented since the 11th century (the oldest in the whole Friuli), since then was the residence of the Porcia and Brugnera family. Next to it sExquisite small town that managed to retain an almost perfectly preserved historical town center, Porcia has numerous interesting spots and an enviable naturalistic patrmony, mostly regarding water. There were many prehistoric settlements in the area, during the Bronze and Iron Ages, mainly Santa Rufina di Palse, where a paleo venetian village was recently discovered. The castle dates back to the XI century (the oldest in Friuli), and has ever since been the residence of the Porcia and Brugnera Houses. Theneo-gothic parish of San Giorgio (st. George) is fairly close, with an odd belltower that dates back to 1488 and was made to emulate St Mark’s but whose construction was forcedly stopped at only 44 metres. In the eastern suburbs of the town, a place called Rorai Picolo, the villa Correr-Dolfin (XVII century) can be seen, in its most notable location.tands the neo-Gothic parish church of St. George with its unique bell tower dating 1488, created as a copy of the St. Marc’s bell tower in Venice, but forcibly stopped at 44 m. In the eastern suburbs, at Rorai Piccolo, stands the spectacular Villa Correr-Dolfin (17th century), situated in a magnificent environment.
by : Folkest-2021
comment : Off