Taverna Umberto I in concert at Cercivento – 26 June

Continue the fortieth edition of Folkest that once again brings together artists came from all over the world that is move from municipality to municipality in a succession of musical tradition came from Magna Grecia to Scotland, from Belarus to Ireland and from Sicily to Sweden.

Sicily it will be the lead of Tuesday 26th June with the group “Taverna Umberto I” born from two Sicilian brothers, Giuseppe and Gian Filippo Santangelo. The name is a tribute to a historian local who is located in Piazza Armerina, known place of the island. In 2008 they released the first studio album, “Parole dal Sud”, composed of unreleased tracks and lyrics
Autobiographies, facts of lived and other imaginative stories that recall the colors and scents of their land, Sicily, and with them people, love, memories and emotions that sometimes touch the heart of who listen to them.
There is no lack of criticism of the problems of society and of a relationship between the new and the ancient. The new album, “Passo dopo Passo”, will be presented at Folkest. 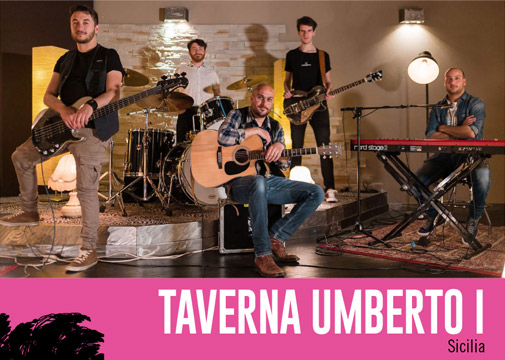 Cercivento rises at the confluence of Valcalda with the But Valley. It is divided into the inhabited areas of Cercivento di Sotto and Cercivento di Sopra and in the towns of Vidal, Cjandelin and Costa. It was a Longobard presidium and the site of a ”parish church”. Between the end of the sixteenth and the eighteenth century Cercivento knew perhaps the most flourishing moment of his history: in this period the most beautiful houses were born, including the Citars, Tiridin, Morassi, Vezzi and Pitt houses. However, economic growth arrested, at least momentarily, in 1692 – the so-called year of the flood – when a huge landslide buried the village of Centa, which stood behind today’s cemetery. In the eighteenth century the current parish was built. In 1966, due to numerous and violent rains, the Farie di Checo, the forge manufacturing symbol of the country, ceased his activity. Although damaged by the earthquake of 1976, the country with the reconstruction has preserved the typical features of the splendid historic houses that, together with the thematic artistic project Cercivento … an Open-air Bible, are a source of interest for a nascent cultural-religious tourism. Secular traditions are preserved, such as the blessing of flowers at St. John or the singing of the Cantors on December 31st. Finally the enchanting landscape of the valley floor and of Mount Tenchia, where located the celebrated Pian delle Streghe.